CFBA: The Jewel of Gresham Green by Lawana Blackwell

Song Stuck on the Brain: Oh, Where is my Hairbrush by Larry the Cucumber (VeggieTales)
I Heard it on the radio and it made me think of my nephew Aaron. He was 2 and he LOVED Larry. He sang the hairbrush song off-key all the time. It was adorable. :) 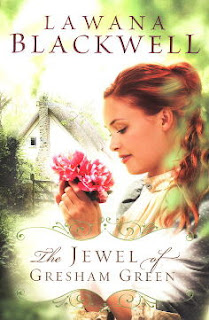 To protect her precious daughter from the danger nipping at their heels, Jewel Libby must flee the only home she's ever known. Caring friends direct her to the vicarage in the peaceful dairy village of Gresham, but she arrives there to find Vicar Andrew Phelps and his wife immersed in troubles of their own.

The children of Vicar Andrew Phelps and Julia Hollis from the popular Gresham Chronicles series have grown up and are dealing with their own challenges. Philip Hollis, now a successful London surgeon, has a controlling wife who resents his close family ties.

Aleda Hollis lives in a cottage on the outskirts of Gresham, where she enjoys her privacy and a writing career. When Andrew becomes ill and in need of Philip's skills, and Aleda's quest for privacy unwittingly advances an evil man's schemes, it's Jewel Libby, a newcomer to Gresham, who becomes an unexpected support and source of strength to the family. An unlikely romance adds to the intrigue of this jewel in their midst.

If you would like to read the first chapter of The Jewel of Gresham Green, go HERE 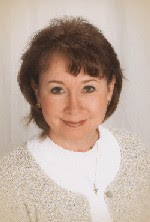 A full-time author, Lawana Blackwell's books include her beloved Gresham Chronicles and Tales of London series.

"I had told myself long ago that three books in a series are enough for my attention span, and so after The Dowry of Miss Lydia Clark, I devoted myself to the trio of books in the Tales of London series, then wrote A Table By the Window, my contemporary novel. All along, I received letters from readers asking me to continue the Gresham series. Many, many wrote that the dairying village of Gresham and its people sent them back to a more peaceful time in the midst of their busy days.

"Prayerfully, I decided to return to Gresham, setting the story fifteen years after Julia Hollis and her children first left London for abandoned coaching inn which became Larkspur Inn. I believe readers would like to see how the children—Philip, Aleda and Grace, Elizabeth and Laurel—turn out as adults. But I like to inject fresh faces into every book, hence Jewel Libby and her daughter Becky find Gresham a haven from a bad man. Writing the book was like coming home, visiting old friends."

Blackwell lives in Louisiana with her husband, Buddy, a supervisor at an oil refinery. They are empty nesters who love to visit their three grown sons, Joseph, Matthew, and Andrew, and three lovely daughters-in-law, Kristine, Penny and Heather, granddaughter Madelyn, and grandson Chandler.

Her other interests include visiting her parents and siblings in Mississippi, vegetarian cooking, and naturally, reading.