CFBA: In the Field of Grace by Tessa Afshar

Song Stuck on the Brain: Let Us Shake Off the Coals of Our Garments (hymn)

Tessa Afshar is back with another hit. YAY! If you're a follower of my blog, you're familiar with this author because I've reviewed and raved about every one of her books. I'm very particular about my Bible fiction. It's a careful balance between retelling the story in precise detail and filling in the details with history and fictional license without changing anything or leaving anything out. Add to it that it needs to be enticing, entertaining and captivating. A balance between drama and hope. Tessa does it all. She has a gift for story telling that allows me to step into the pages of the Bible and relive history in detail all while feeling I learned something new and enlightening in my relationship with Jesus.

Ruth's story is one of my favorites, but I always wondered why her story had so much to share that she got her own book. Obviously there are genealogical connections and other things that make her story important, but Tessa shines a light on Ruth and brings her into a new perspective that really opened up her story to me. It's beautiful. My mom has already read it and loved it and now my 17 year old niece is reading it. This is a book for all ages. Don't miss out. 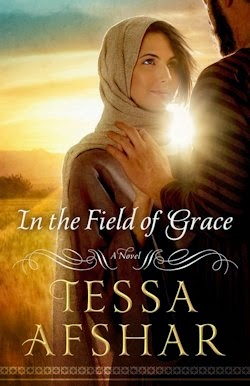 Destitute, grief-stricken, and unwanted by the people of God, Ruth arrives in Israel with nothing to recommend her but Naomi's, love. Her loftiest hope is to provide enough food to save Naomi and herself from starvation.

But God has other plans for her life. While everyone considers Ruth an outcast, she is astounded to find one of the most honored men of Judah showing her favor.  Long since a widower and determined to stay that way, Boaz is irresistibly drawn to the foreign woman with the haunted eyes. He tells himself he is only being kind to his Cousin Naomi's chosen daughter when he goes out of his way to protect her from harm, but his heart knows better.

Based on the biblical account of Ruth, In the Field of Grace is the story of a love that ultimately changes the course of Israel's destiny and the future of the whole world.

If you would like to read the first chapter of In The Field of Grace, go HERE.

TESSA AFSHAR was voted "New Author of the Year" by the Family Fiction sponsored Reader's Choice Award 2011 for her novel Pearl in the Sand. She was born in Iran, and lived there for the first fourteen years of her life. She moved to England where she survived boarding school for girls and fell in love with Jane Austen and Charlotte Bronte, before moving to the United States permanently. Her conversion to Christianity in her twenties changed the course of her life forever. Tessa holds an MDiv from Yale University where she served as co-chair of the Evangelical Fellowship at the Divinity School. She has spent the last thirteen years in full-time Christian work.

Email ThisBlogThis!Share to TwitterShare to FacebookShare to Pinterest
Labels: CFBA, In The Fields of Grace, Tessa Afshar

Song Stuck on the Brain: Mama He's Crazy by the Judds

DiAnn Mills is a master at building suspense and plucking the heartstrings all while keeping it in a perfect whirlwind, ninety or nothing, supercharged balance. Did that make sense? LOL If you're not sure pick up Firewall and you'll see what I mean. It starts with a bang and never stops. I loved it. I especially enjoyed the well timed spiritual comments that struck a chord but didn't weigh down the story. Oh, and Buddy. Just wait until you meet Buddy. He may be my favorite hero second to Agent Grayson Hall.

I loaned this one to my mom and she had it back to me in less than 2 days. She said, "That was intense! Do you have any other books by her?" Oh yeah, you bet I do! :) Neither of us can wait for more from DiAnn Mills. Don't miss out on the action, check out Firewall A.S.A.P.

After a whirlwind romance, Taryn Young is preparing to board a plane at Houston International Airport, bound for a dream honeymoon, when a bomb decimates the terminal. Injured but still alive, she awakens to discover her husband is missing and they’re both considered prime suspects in the attack. Further, the FBI is convinced her husband isn’t who he appears to be.

Agent Grayson Hall’s number-one priority is to catch those responsible for the day’s act of terror. All evidence is pointing to Taryn and her new husband. But his instinct tells him her pleas of innocence are genuine. Is her naiveté just for show, or could she truly be another victim of a master scheme, possibly linked to the software she recently developed for her company?

With both their lives and reputations on the line, and the media outcry for justice increasing with each passing minute, Taryn and Grayson have no choice but to trust one another . . . and pray they can uncover the truth before they become two more casualties.

If you would like to read the first chapter of Firewall, go HERE.

DiAnn Mills believes her readers should “Expect an Adventure.” She is a fiction writer who combines an adventuresome spirit with unforgettable characters to create action-packed novels. Her books have won many awards through American Christian Fiction Writers, and she is the recipient of the Inspirational Reader’s Choice award for 2005, 2007, and 2010. She was a Christy Award finalist in 2008 and a Christy winner in 2010.

DiAnn is a founding board member for American Christian Fiction Writers, a member of Inspirational Writers Alive, Advanced Writers and Speakers Association, and is the Craftsman Mentor for the Christian Writer’s Guild. She speaks to various groups and teaches writing workshops.