Song Stuck on the Brain: Hey Brother by Avicii

The Wood's Edge showed how just a split second decision can be felt for a lifetime of  more. Major Aubrey is grieving and makes a terrible choice, to steal one of the twins from an Oneida mother and replace it with his own dead child. That would be terrible enough, but as his lie progresses it affects everyone near him. Lori Benton has done a fantastic job presenting the rippling results from a tiny stone tossed in a moment in time. Love, heartache, anger, fear - forgiveness. It's a beautiful story and the historical research and well described setting set me back in time until I felt their life in 18th century New York frontier come to life.

If you enjoy historical novels or just enjoy a really well crafted story, you won't want to miss this one. 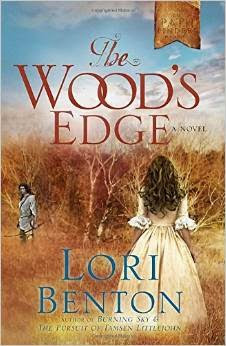 At the wood’s edge cultures collide. Can two families survive the impact?

The 1757 New York frontier is home to the Oneida tribe and to British colonists, yet their feet rarely walk the same paths.

On the day Fort William Henry falls, Major Reginald Aubrey is beside himself with grief. His son, born that day, has died in the arms of his sleeping wife. When Reginald comes across an Oneida mother with newborn twins, one white, one brown, he makes a choice that will haunt the lives of all involved. He steals the white baby and leaves his own child behind. Reginald’s wife and foundling daughter, Anna, never suspect the truth about the boy they call William, but Reginald is wracked by regret that only intensifies with time, as his secret spreads its devastating ripples.

When the long buried truth comes to light, can an unlikely friendship forged at the wood’s edge provide a way forward? For a father tormented by fear of judgment, another by lust for vengeance. For a mother still grieving her lost child. For a brother who feels his twin’s absence, another unaware of his twin’s existence. And for Anna, who loves them both—Two Hawks, the mysterious Oneida boy she meets in secret, and William, her brother. As paths long divided collide, how will God direct the feet of those who follow Him?

If you would like to read the first chapter of The Wood's Edge, go HERE.

Lori Benton spent her late teens and early twenties pursuing a career as a wildlife artist, attending the Maryland College of Art & Design before she began painting professionally. When not writing or researching, Lori can be found exploring the mountains of southern Oregon with her husband, Brian. Lori's first novel, Burning Sky was nominated as an ECPA 2014 Christian Book Award Finalist and also received double nominations for 2014 Christy Awards. The Pursuit of Tamsen Littlejohn is her second novel.

Song Stuck on the Brain:  An extremely unique bird call that reminds me of the MockingJay. I've been hearing it for 3 days and can't figure out what bird it is. I've listened to thousands of bird calls on line and Nada. I'm beginning to think this is  rare bird only I hear. Hmmm. There may be a story there...

Today is National Limerick Day! I had so much fun with this last year, that I didn't want to miss it again this year. I've written some original limericks to share. 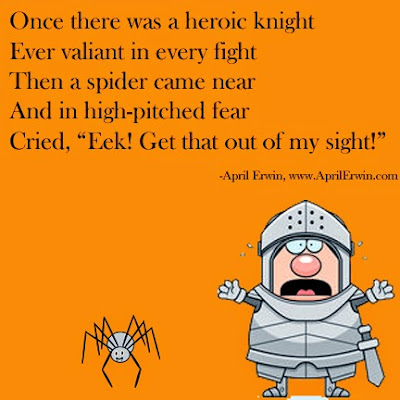 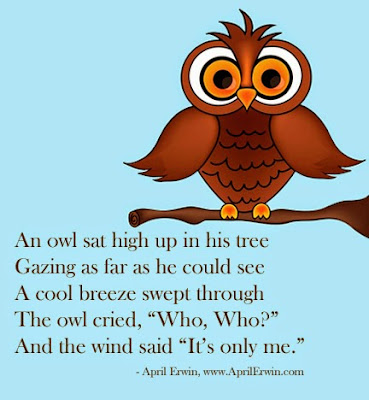 And for all the struggling writers that spend more money promoting their books than they make but do it anyway because they love their craft: 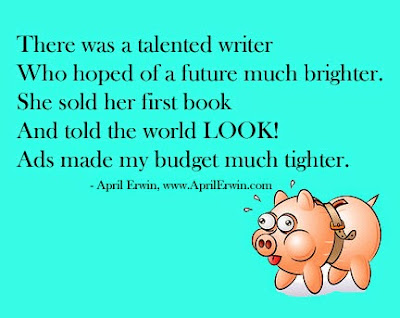 When I shared these with my mom, she immediately came up with her own starter: "There once was a chicken named Peepers, Who marched through the town wearing sneakers..." Then said she couldn't think of a way to finish it. So, working together, we came up with two totally different limericks. It's fun how the same starter can be so different.

Show me what you got or share your favorite limerick. :)
Posted by April Erwin at 5/11/2015 No comments: