Netgalley: No Way Up by Mary Connealy

Song Stuck on the Brain: The Ants Go Marching... I was singing it with my great-nephew and niece this morning and I'm still singing about those militant ants. :)

I signed on early with Netgalley.com to get the opportunity to read and review Mary's latest adventure/laugh riot cowboy romance. Love her books. Unfortunately, there were technical issues and although I was able to download the e-book, pages were missing. A LOT of pages. This was a prerelease file so I decided if I wanted to read the story and not guess at what 5 missing pages had said, I should buy the eBook. So I did. BEST choice ever. Supported the author's sales AND I got a perfect file. YES!!

So, how did I like the Cimarron Ranch, you ask? It was awesome. Mary weaves her settings flawlessly. It's great to see the appearance of Heath Kincaid and follow his story arc not only to romance, but love and understanding in several different relationships. The story has depth and heart that isn't always obvious in the moment because your too busy slapping your knee with laughter, but that heart and strength is what proves them all wrong when they're sure there is No Way Up.

Loved it and the prequel The Boden Birthright. Great new adventure for long time Connealy fans or for those just discovering her. 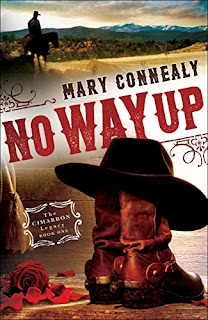 The Fight for the Cimarron Ranch Has Just Begun!When Cimarron ranch patriarch Chance Boden is caught in an avalanche, only the quick actions of hired hand Heath Kincaid save him. Before leaving by train to receive treatment to save his leg--and possibly his life--Chance demands that Heath read the patriarch's will and see its conditions enforced immediately. If Chance's three bickering adult children, Justin, Sadie, and Cole, don't live and work at the home for an entire year, ownership of the ranch will pass to a despised distant relative. Before long, however, Heath discovers that the avalanche may have been intentionally set--and that more danger lurks ominously. Finding his own future--and a desired future with Sadie--locked up in saving the Cimarron Ranch, Heath and the Boden siblings must work together against outside forces that threaten them all. 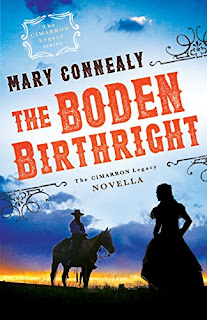 After the death of his wife, prosperous businessman Chance Boden heads west along the Santa Fe Trail with his son to escape the powerful, controlling hands of his in-laws. He has plans to establish his own ranch, but instead he finds work with Frank Chastain, owner of a vast amount of land.Chance doesn't want to work for anyone, but Frank's beautiful daughter gives him reason to delay buying his own holdings. With winter coming, no home in which to live, and Veronica's offer to care for young Cole while Chance learns the ways of successful ranching in the desert, Chance has little choice but to accept the Chastains' offer to stay on.When Frank is attacked, his dying wish is that Chance marry his daughter, but after dealing with his in-laws, Chance isn't going to let anyone come between him and his son. Then Frank's precarious hold on the land he received as part of an old Spanish Land Grant forces Frank to make a desperate choice to save Veronica's inheritance--and also gives the men who attacked Frank reason to come after him. 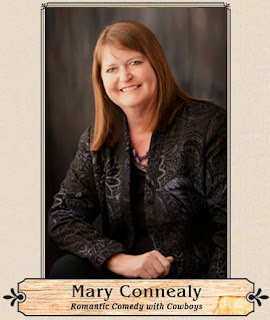 Mary Connealy is the bestselling author of romantic comedy with cowboys. She is a Carol Award winner and a Rita and Christy and IRCC Award Finalist.
She is the author of The Cimarron Legacy series, Trouble in Texas series, Swept Away, Fired Up and Stuck Together, The Kincaid Brides Series, Out of Control, In Too Deep and Over the Edge.The Sophie’s Daughters Series, Doctor in Petticoats, a Rita Award finalist,Wrangler in Petticoats and Sharpshooter in Petticoats. These three books are now contained in the single volume Sophie’s Daughters Trilogy. The Montana Marriages Series, Montana Rose, The Husband Tree and Wildflower Bride. Montana Rose was a Carol Award Finalist. These three books are now available in the single volume Montana Marriages Trilogy. The Wild West Wedding series Cowboy Christmas—the 2010 Carol Award for Best Long Historical Romance, and an Inspirational Readers Choice Contest Finalist, and In Too Deep. The Lassoed in Texas Series, Petticoat Ranch, Calico Canyon and Gingham Mountain. Petticoat Ranch was a Carol Award Finalist. Calico Canyon was a Christy Award Finalist and a Carol Award Finalist. These three books are now contained in one large volume called Lassoed in Texas Trilogy.
She is also the author of; Black Hills Blessing, a 3-in-1 collection of sweet contemporary romances. She is one of the four authors contributing to Alaska Brides Collection with her Carol Award Winning historical romanceGolden Days along with Tracie Peterson, Cathy Marie Hake and Kathleen Y’Barbo.
She had published two ebook Christmas novella collections. A Home for Christmas with Robin Lee Hatcher and Candlelight Christmas with Linda Goodnight. And with a pseudonym she has published the romantic thriller Ten Plagues and she has republished three out of print books Bury the Lead, Fright at the Museumand Trial and Terror, three lighthearted cozy mysteries formerly published as the Nosy in Nebraska series under the titles Of Mice…and Murder, Pride and Pestilence and The Miceman Cometh.
Find Mary online at:
SeekervillePetticoats & PistolsMy Blog My Website

I initially received a free copy of this book in return for my honest opinion.
Posted by April Erwin at 8/24/2016

Email ThisBlogThis!Share to TwitterShare to FacebookShare to Pinterest
Labels: Books, Mary Connealy, Netgalley, No Way Up, The Boden Birthright