Into the Wild by Sarah Beth Durst

Song Stuck on the Brain: Take Me Out to the Ball Game

I love fairy tales. I'm addicted to them. So when I found Into the Wild by Sarah Beth Durst, I thought I'd give it a try. I'm so glad I did, what a fun read.


What's on the Cover: 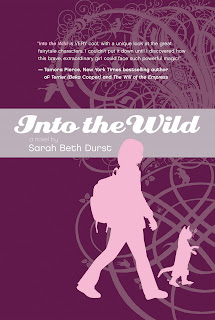 “Let me put it this way: when your mom cooks, she doesn’t have to close the doors to make sure the Gingerbread Men don’t run outside.”

Junior high is tough enough, even when your family is ordinary. And Julie Marchen’s family is
anything but ordinary: her brother is a talking cat, her grandmother is a bona fide witch, and her mother is Rapunzel.

Yep, that Rapunzel—long hair, tower, prince… Five hundred years ago, Rapunzel escaped the
fairy tale with her fellow storybook characters to live incognito in our world. But now Julie’s
world, our world, is about to change—the fairy tale wants its characters back.

Now Julie must fight wicked witches, avoid glass slippers, fly griffins, and outwit magicians in order to rescue her mom and save her town from becoming a fairy tale kingdom. Sarah Beth Durst grew up in Northboro, MA, a town in central Massachusetts which (she claims) was temporarily transformed into a fairy tale kingdom for several days in 1986. These events later inspired her novel, Into the Wild, as well as her paralyzing fear of glass footwear.
Sarah has been writing fantasy stories since she was ten years old. She holds an English degree from Princeton University and currently resides in Stony Brook, NY, with her husband and daughter.

What Others Have Said:
“Into the Wild is VERY cool, with a unique look at the great fairytale characters. I couldn’t put it down until I discovered how this brave, extraordinary girl could face such powerful magic!” --Tamora Pierce, New York Times bestselling author of Terrier (Beka Cooper) and The Will of the Empress
“Sarah Beth Durst’s Into the Wild is fabulous in the oldest, truest, and best sense of the word,
harking back to fables, wonder, and magic unleashed. It’s bold, sassy, and utterly engaging. I can’t wait to see what she does next!” -- Bruce Coville, author of The Unicorn Chronicles and Jeremy Thatcher, Dragon Hatcher
My Take:
How's that for a new twist on the fairy tale? It reminded me a little bit of Michael Buckley's Sister's Grimm series. Fairy tale characters living in the real world under new identities. The creative twist that seperates the two series, is the Wild. A living, intelligent, plant-like magical creature that controls the fairy tale characters. For years it's been living under Julie's bed, but one ill-chosen wish sets it free and it grows at an alarming rate, sucking in fairy tale and non-fairy tale people to fill it's stories. It really was a rather insidious and sinister twist.

The cleverness of both Sarah Beth's story telling and her character Julie's actions, is in their breadth of knowledge about fairy tales. They know them all, and use each one to maximum impact. Julie is a brave kid and the only one capable of entering the Wild to save her family. She knows the Wild's tricks and the stories it employs to trap it's victims. I enjoyed tracking the clues to discover what story Julie was entering.

The book is geared more for a younger audience, 10 years and up, but I found that it didn't really matter to me. It's a book for the young at heart, regardless of the reader's age.

I'm really fortunate, that Sarah Beth made contact with me through our My Space pages. Without that, I might have missed out on this book and that would have been a shame.

Just to prove what a fun and friendly author she is, she allowed me to pick her brain.

Interview With the Author:

A: Into the Wild is such a creative, imaginative story. What was your inspiration for Julie's story?

SBD: I have always loved fairy tales. The dark original Grimm’s tales, the watered-down "for children" illustrated tales, the fractured fairy tales, the retold-in-novel-form tales, the only-vaguely-resembling-the-original tales... I love them all. Just give me a talking cat, a magic mirror, and/or a pair of glass slippers, and I'm happy. So it was really only natural that my debut novel, INTO THE WILD, would involve fairy tales.

The original idea came from wondering what it would be like to meet fairy-tale characters outside of the fairy tale. What would they do if they lived here and now? Obviously, Rapunzel would own a hair salon, Cinderella would drive an orange car, and the Singing Harp from Jack and the Beanstalk would appear every Saturday night at the local bar to sing karaoke. All very nice, but what would happen if the fairy tale wanted its characters back?

A: Do you have a favorite character in the book? If so, who is it and why?

SBD: I love them all. I even love some characters that I cut many drafts ago. But if I had to choose... Maybe Gothel. Gothel is Julie's beloved grandmother. She used to be the wicked witch of fairy tales, a fact which she both enjoys and hates. I love her because she has risen above her fate. She was created to be the wicked witch, but by sheer force of will, she has changed herself. One of the lines that describes her is actually one of my favorite sentences in the book: "She looked like an innocent elderly lady – and in point of fact, she hadn’t boiled a child in years."

SBD: I think I identify the most with Gillian, Julie's best friend. While Julie and her fairy-tale family fear and hate the return of the world of fairy tales (the Wild), Gillian's reaction is, "That's so awesome!!!" I would totally react like Gillian. And then a wolf would eat me or something.

I identify the least with... I really don't know. Of all the characters, I think the seven dwarves would least identify with me. They'd say that I haven't had the benefit of a proper forest education and that I don't keep my house nearly as clean as their beloved Snow would.

A: If you were trapped in the Wild, what story would your story be?

SBD: I hope it would be Beauty and the Beast because that's pretty much the only fairy tale where nothing too awful happens. Imagine being stuck as Cinderella: yes, there's the ten minutes of happy dancing with the Prince but the rest of your life is drudgery. Or Sleeping Beauty: lots and lots of napping. Or worse, what if you were trapped in the role of the witch in Hansel and Gretel and were shoved into an oven? Or the queen in Snow White, forced to dance to death in red-hot iron shoes (or fall off a cliff, if you want to go with the Disney variant)? There really aren't many nice fairy tales out there. At most, you get a few minutes of "happily ever after" at the end, but the bulk of it... You really don't want to be trapped in a fairy tale. Trust me.

A: What are your future writing plans? Any more books in the works?

SBD: I am currently working on the sequel to INTO THE WILD. It's called OUT OF THE WILD, and it will be out from Penguin (under the Razorbill imprint) next summer. After that... I intend to keep writing books for as long as my fingers can type. It's quite simply what I want to do with my life.
Thank you, Sarah Beth for sharing! I look forward to the next book. If you would like to contact Ms. Durst, you can visit her at the following sites:
Web: http://www.sarahbethdurst.com/
Blog: http://sarahbethdurst.blogspot.com/
MySpace: http://www.myspace.com/sarahbethdurst
A.
Posted by April Erwin at 7/19/2007

I loved this book i think it is the best book that i have ever read!!!