CSFF: Curse of the Spider King by Batson & Hopper

Curse of the Spider King
The Berinfell Prophecies 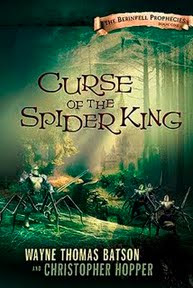 The Seven succeeding Elven Lords of Allyra were dead, lost in the Siege of Berinfell as babes. At least that's what everyone thought until tremors from a distant world known as Earth, revealed strange signs that Elven blood lived among its peoples. With a glimmer of hope in their hearts, sentinels are sent to see if the signs are true. But theirs is not a lone errand. The ruling warlord of Allyra, the Spider King, has sent his own scouts to hunt down the Seven and finish the job they failed to complete many ages ago.

Now 13-year-olds on the brink of the Age of Reckoning when their Elven gifts will be manifest, discover the unthinkable truth that their adoptive families are not their only kin. With mysterious Sentinels revealing breathtaking secrets of the past, and dark strangers haunting their every move, will the young Elf Lords find the way back to the home of their birth? Worlds and races collide as the forces of good and evil battle. Will anyone escape the Curse of the Spider King?
About the Authors:

Wayne Thomas Batson was born in Seabrook, MD in 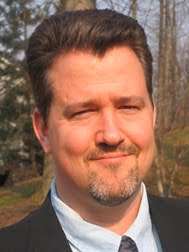 1968. He attended Gabriel DuVal Senior High School and wrote this for his Yearbook Senior Goals: To become a professional writer or artist. During the high school and early college years, he played lead guitar for a rock band called "Contagious." They were catchy, but apparently not enough to get a record deal.

Wayne Thomas Batson has spent the last fifteen years teaching Reading and English to middle schools students. He lives in Eldersburg with his beautiful wife of eleven years and his four wonderful young children. Besides dividing his time between family, teaching, and writing, he likes to read, golf, play PS2, travel to the beach, play electric guitar, and create 3D artwork.
Christopher Hopper is a recording artist, record 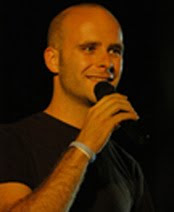 Thanks for the intro to Spider King, April! CH and I will be around, so let us know if you have questions.

Nice intro. Love the spot on the authors. These guys sound like cool cats :)

April, special thanks for participating in this tour.