Song Stuck on the Brain: Bring Him Home from Les Mis by Colm Wilkinson
My absolute favorite musical. This song is so amazing.

This month the CSFF is touring:
By Darkness Hid

MY TAKE:
Jill Williamson has a smash hit on her hands. I love this book, and I'd better not have to wait for the sequel very long. :)
Achan and Vrell are the kind of people you wish you knew in real life. In some ways even the people you wish you could be. They inspire you to be stronger, better, even more daring. The secondary cast aren't far behind. You feel their frustration, the injustice they face, even the desire for hope and a better life. There are characters you despise and others you cheer for every page of the way. Being able to completely immerse yourself in a story, is one of the best ways to rate a novel. So Jill gets a five star rating from me.
A great story and characters earn her high marks, but the intricacy she puts into the background and descriptions earns her bonus points. You feel that she's not only done the research, but that there's a good chance she's actually used or lived it in some way.
For example her knowledge of natural healing and herbology is fantastic. I've worked in the health food and medicinal herbs market for over 15 years. Jill KNOWS what she's talking about. It wasn't a smattering of little common facts here and there, she put effort into making it real. Her facts were thorough. And she did it all in a way that blended seamlessly into the story. No dry facts or scenes that ran on pointlessly. That's just one example. I think she must be a great swordsman as well. :)
As a writer I tend to notice small things like that and kick myself for missing that kind of detail in my own work. Not only the use of detail, but using it in an appropriate way. Jill isn't just a great writer and storyteller - she's an inspiration to the rest of us still trying to make our way on a writer's journey.
Kudo's Jill, you deserve it. 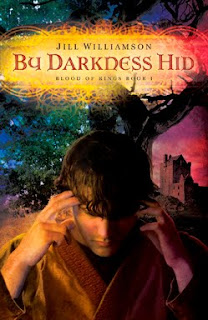 Half of Er’Rets is locked beneath an impenetrable shroud. On the side that still sees the sun, two young people struggle to understand the mind-communication abilities thrust upon them. It’s called bloodvoicing. Some say it’s a gift. One of the newly “gifted” wish it had never come.

Achan has been a slave all his life. He is consigned to the kitchens of a lord and forced to swallow a foul potion every day. When an enigmatic knight offers to train Achan for the Kingsguard, he readily accepts. But his new skills with the sword do not prepare him for the battle raging between the voices in his head.

Vrell Sparrow is not who she seems. She masquerades as a boy to avoid capture by the powerful forces that seek to exploit her. But Vrell feels called to help a young squire who recently discovered his bloodvoicing gift, even if doing so requires her to work with those who could destroy her.

While Achan learns to use his new ability, Vrell struggles to shut hers down. All the voices strive to learn Achan and Vrell’s true identities—and a different kind of voice is calling them both. 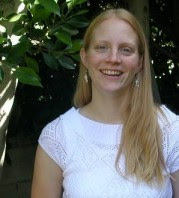 Jill was raised in rural Alaska. Alone with her thoughts and the moose, daydreaming was a favorite pastime. As was reading.

She always loved reading. She started out with Nancy Drew, the Hardy Boys, Little House on the Prairie, the Hobbit, and The Chronicles of Narnia. She loves just about every genre out there, but her all time favorites are fantasy and suspense.

Jill met Brad in college and they married after graduation. Her dreams of becoming a fashion designer dragged the couple to New York City for one year. After that, Brad’s dreams of directing movies dragged them to Los Angeles. They both worked really hard for people who weren’t very nice.

A few years of torture passed.

Brad started volunteering with teens at their Burbank church. They had their first son, Luke, moved to a house, Jill got out of the fashion industry (woo hoo!), and Brad became an ordained minister and full time youth pastor (double woo hoo!). God is good. All the time.

Jill started writing a book. It seemed like a good idea at the time. She didn’t have a clue what she was getting into. All she knew for certain was that it was really fun. With two babies at home, it was a neat way to pass the time.

Writing was something Jill never really did before then. Daydreaming and plotting, however, were familiar old friends. So now Jill writes…everywhere. At home, in the car, at church (only notes, I promises!), in line at the grocery store, at the park, while walking, in the shower… (TMI?) and she loves it. She finds creating characters and taking them on a journey an amazing experience. She never knew what it could be like until she met Spencer, Nauja, Martyr, and Achan. Writing was a whole lot of fun. Plus, she couldn’t get in trouble for forgetting to add a rosette onto a K-mart costsheet and costing the company a loss of $5,000. (True story…) And, she can’t get yelled at when the line of evening gowns she shipped via Fed Ex doesn’t reach the showroom in New York in time for Market to open. (Was it really her fault the plane got snowed in?)

No. Jill has no bitter memories of the fashion industry at all. (Can we say The Devil Wears Prada, anyone?)

April,
Thanks so much for the review! You totally made me smile with your mention or herbs and healing. I know NOTHING! I researched it all. I was so nervous about all that, hoping I did a good job. Same with swordfighting, though I am making some wooden wasters and once I have two, I have to talk my husband into trying some of these moves I learned in the book. I'll probably just get hurt... If I do, I'll call it research and put the sword away.
:-)
Jill