Song Stuck on the Brain: I Just Haven't Met You Yet by Michael Buble

I am a HUGE Lawhead fan. I was hooked with The Songs of Albion series and haven't stopped reading him since. He's an extremely gifted writer, weaving in detail like an artisan lace maker.

His latest release, The Skin Map, just blew me away. It's such an awesome concept. Ley lines are fascinating to me, and something that I've toy researched over the years. I understand what they are and some of the theories surrounding them, but Mr. Lawhead raised it to a whole new level. His depth of research into quantum physics is impressive and world(s) he created for Kit and Mina to explore are amazingly detailed and researched as well.

What makes this even more exciting in my mind, is that this book is a little of a genre bender. It's a little fantasy, a little sci-fi, Adventure/Thriller and historical. It has something for everyone, and yet is balanced is such a way, that if you are intimidated by the words 'quantum physics', you don't have to be. It's only part of the overall whole of the plot and laid out so well for the reader it's easy to understand.

The Skin Map of course is the first in a five book series, with book two releasing next fall. I'm thrilled to know there are four more books coming, I devoured The Skin Map in about 30 hours. (I'm kind of an all in reader when I have the time.) I nearly cried when I saw how long I'd have to wait for the next book. I would happily lock myself away for a solid week in order to read the whole series straight through.

My recommendation: Read it now - share it - then read it again next fall in prep for book 2... 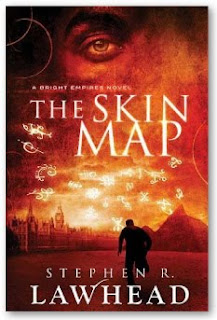 Londoner Kit Livingstone misses his train and then gets lost on his way to his girlfriend Wilhelmina's house. While taking a shortcut through a narrow alley, a life changing event occurs. A wild storm breaks out and his great grandfather, Cosimo, supposedly dead over a hundred years, calls out to him. His grandfather tells him he has a gift and shows him a whole new world. One minute in a stormy London alley, the next on a seaside dock in 17th century England. Kit isn't sure if it's real or he's just dreaming. Cosimo reveals secretive time travelers are racing the evil Lord Archelaeus Burleigh to locate a map holding an earthshaking secret.

Back in London, Kit tries to explain to Wilhelmina what happened, but she won't believe him. Determined to convince her, he takes her back to the alley to jump with him, but Mina doesn't appear on the seaside docks with him. She's been lost to another timeline. Now Cosimo and Kit must find her and stop the ripple of effect her untrained jumping may have on all the time lines.

Wilhelmina has arrived in Prague. Grateful for her Grandmother's German lessons, she's able to communicate, but the culture is a shock. A kind baker named Etzel befriends her and she finds life in Prague may be different, but she's finding a way to make it a home for now. 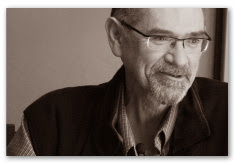 His middle name is ‘Ray’.
Be sure to visit the other tour members sites as well:

This is an excellent review, April, and its fun to find another longtime SRL fan! Did you participate in the national treasure hunt? There were so many people it was hard to keep track.

I love your reaction to the book and series, April. It's gratifying to see those who love the story passing along their enthusiasm to others.

Robert, somehow I missed the national treasure hunt. Maybe I need to unbury my nose from a book just a titch more often. :) Sounds like it would have been fun.

As for Enthusiasm, Becky, SRL is easy to get enthusiastic about. His work is, to me, mindblowing. And when you love something that much, how can you not share it with everyone else and spread the love? :)