Song Stuck on the Brain: I've Been Waiting for a Girl Like You by Foreigner

Blame it on a commercial, I think it was being sung as "I've been waiting for a snack like you..." but once the tune got started the original recording dropped and has been spinning in my brain ever since.

Ransome's Quest is third in a series and exactly what I was hoping for. Kaye's books never disapoint me. She's a gifted writer with the ability of tugging all the right heart strings and humor chords when needed. Add in adventure and swashbuckling pirates and you get perfection.

Although you could probably read Ransome's Quest as a stand alone novel, I highly recommend reading Ransome's Honor and Ransome's Crossing first. For one, you'll love them also, and two
it adds so much texture and back story for the final book. Now go buy your copies and settle in with a nice glass of lemonade or mint tea. You won't want to stop for refreshments once you get started. 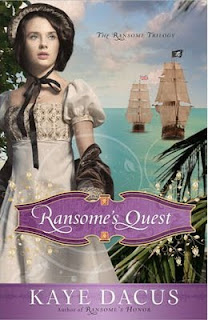 The pirate El Salvador has haunted the waters of the Caribbean for almost ten years. When he snatched Charlotte Ransome, it was a case of mistaken identity. Now Charlotte's brother, whose reputation in battle is the stuff of legend, is searching for him with a dogged determination. But another rumor has reached El Salvador's ears: Julia Ransome has been kidnapped by the man feared by all other pirates--the pirate known only as Shaw. The violent and blood-thirsty savage from whom El Salvador was trying to protect her.

When word reaches William of Julia's disappearance, his heart is torn--he cannot abandon the search for his sister, yet he must also rescue Julia. Ned Cochrane offers a solution: Ned will continue the search for Charlotte while William goes after Julia. William's quest will lead him to a greater understanding of faith and love as he must accept help from sworn enemy and have faith that Julia's life is in God's hands.


If you would like to read the first chapter of Ransome’s Quest, go HERE.

Humor, Hope, and Happily Ever Afters! Kaye Dacus is the author of humorous, hope-filled contemporary and historical romances with Barbour Publishing and Harvest House Publishers. She holds a Master of Arts in Writing Popular Fiction from Seton Hill University, is a former Vice President of American Christian Fiction Writers, and currently serves as President of Middle Tennessee Christian Writers. Kaye lives in Nashville, Tennessee, and even though she writes romance novels, she is not afraid to admit that she’s never been kissed.

Kaye Dacus (KAY DAY-cuss) is an author and editor who has been writing fiction for more than twenty years. A former Vice President of American Christian Fiction Writers, Kaye enjoys being an active ACFW member and the fellowship and community of hundreds of other writers from across the country and around the world that she finds there. She currently serves as President of Middle Tennessee Christian Writers, which she co-founded in 2003 with three other writers. Each month, she teaches a two-hour workshop on an aspect of the craft of writing at the MTCW monthly meeting. But her greatest joy comes from mentoring new writers through her blog and seeing them experience those “aha” moments when a tricky concept becomes clear.