First, let me say, if you haven't read the first book in the Bright Empire Series The Skin Map - what in the multi-verse are you waiting for?! If you missed my original post on this fantastic book, click HERE for an update.

Now that you're up to speed, on to the exciting reason I'm posting today. The Bone House. I have been waiting for this book, impatiently I might add, since I closed the cover of book one a year ago. In fact, when my copy arrived by mail, I squealed so loud my sister had to come see what was wrong with me. It was like Christmas and my birthday came early together.

Stephen Lawhead is one of my favorite writers, he knows how to weave an incredibly in depth story that leaves your head spinning. I think about his books for days, even weeks after finishing them. The Bone House did exactly that. The Bright Empire Series is a little high concept with all of it's physics and multi-verse speak, but it never becomes heavy handed or overwhelming. On the contrary I feel like I'm anxiously begging for more every page I turn.

I'm fascinated by his inclusion of real historical figures from the multiple time lines, such as The Last Man on Earth to know everything. Fascinating. :)

I really can't recommend this book strongly enough, but be warned you MUST read book one first or you'll be rather lost. Don't worry though, it's worth every word invested. 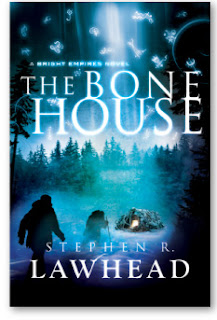 One piece of the skin map has been found. Now the race to unravel the future of the future turns deadly.

An avenue of Egyptian sphinxes, an Etruscan tufa tomb, a Bohemian coffee shop, and a Stone Age landscape where universes collide …

Kit Livingstone met his great grandfather Cosimo in a rainy alley in London where he discovered the reality of alternate realities.

Now he's on the run - and on a quest, trying to understand the impossible mission he inherited from Cosimo: to restore a map that charts the hidden dimensions of the multiverse while staying one step ahead of the savage Burley Men.

The key is the Skin Map - but where it leads and what it means, Kit has no idea. The pieces have been scattered throughout this universe and beyond.

Mina, from her outpost in seventeenth-century Prague, is quickly gaining both the experience and the means to succeed in the quest. Yet so are those with evil intent, who from the shadows are manipulating great minds of history for their own malign purposes.

Across time and space, through manifest and hidden worlds, those who know how to use ley lines to travel through astral planes have left their own world behind in this, the second quest: to unlock the mystery of The Bone House. 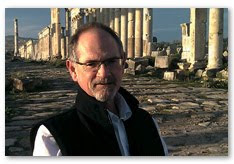 
Visit the other blog tour members:


In conjunction with the CSFF Blog Tour, I received a free copy of this book from the publisher.
Posted by April Erwin at 10/25/2011

April, nice to have you participating in CSFF again. So glad we featured a book by an author you love. This is really a different kind of series, isn't it.

Thanks, Becky, I'm glad to be participating. This series blows my mind. I've always enjoyed nature and science documentaries, but after reading The Bone House, I found several archeology and physics documentaries on Netflix I had to check out. It was awesome how much of what they discussed were familiar to me because of what I'd read in The Bright Empire series. Stephen Lawhead, like Michael Crichton, knows how to spoon feed you the science in understandable bites and have you begging for more. So talented. :)

Good review. I'll have to go back and read many of his older books.

I don't think you would be disapointed if you did, Bruce. I haven't been found a book of his yet that I didn't love.