Song Stuck on the Brain: Pat-A-Pan by David Archuleta 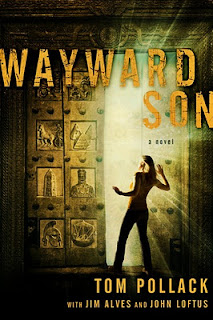 Buried near Italy's Mount Vesuvius is a remarkable observatory containing artifacts dating to the earliest record of human events. Only one person-the Getty Museum's Amanda James-can unlock the mysterious doors that guard the chamber.

But once inside, Amanda is shocked to discover evidence left behind by a notorious biblical killer-who long ago wandered off the pages of history.

The first novel of a series, Wayward Son takes the reader on an amazing voyage, where epic adventures in Egypt, Greece, China and Rome collide with modern-day intrigue and suspense.

I intentionally posted the book blurb first this time, because I want you all to see what drew me to sign up for this tour. It sounds exciting! I love archeology and suspense and mystery. However, when it comes to Biblical history, there's a fine line between 'What IF?' and 'Let's just change the facts'.

First off, let me apologize in advance. I hate giving negative reviews, and when I do, I try my best to be honest but not cruel. I hope that shows. I do try to be careful when I choose books to review. I know some books aren't my style, so I avoid them. Speculative Fiction being one of those genres. But in reading the book blurb, I didn't get the impression that this was speculative fiction. If I had, I might not have picked it up. So, I realize some might read this book and have a completely different reaction, but I have to be honest. Here goes.

(SPOILERS) The book started out great. Amanda is an interesting character. So are her contemporaries. The journey to Italy and the triumph of breaking the code to open the buried doors were wonderful. Edge of my seat, ready to go. Then Amanda touches a pendant in the buried room and is sucked through time in spirit to see Cain fleeing his home after killing Abel and being cursed by God. Although a strange and kind of jarring leap, I stayed with it. Remember I love SciFi and Fantasy, so this isn't a stretch for my mind. By the way, this is the Biblical killer mentioned in the back blurb.

Within a few pages, I found myself scratching my head and saying "WHAT?" Cain comes off as a victim, a pawn that is clueless. The Master of Spirits as he calls Satan, is of course rationalizing his murder of Abel and slandering God. No problem there, Satan twists the truth. But what did bother me is that Cain acts as if he doesn't know who this Master of Spirits is, or why any of this has happened. He's just a confused human suckered into this mess and is now cursed.

The KJV isn't as clear on this accounting, but the Inspired Version in Genesis 5 makes it clear that Cain knew who Satan was and had covenanted with him. It says Cain loved Satan more than God. Cain swore a blood oath and begin a secret society that worshiped Satan. Cain may have been a pawn in Satan's plan, but it was not unknowingly or unwillingly. IV Genesis 5:6-26.

Next is Cain's sneaking aboard Noah's Ark to hide as a stowaway. Foraging on food for the animals, he manages to stay hidden from Noah and his family for months. Yes, the ark was only afloat for 40 days, but it took longer for the waters to abate enough for them to leave the ark, nearly a year in fact. KJV Genesis 7:11 "In the six hundredth year of Noah's life, in the second month, the seventeenth day of the month, the same day were all the fountains of the great deep broken up, and the windows of heaven were opened." Genesis 8:13 "And it came to pass in the six hundredth and first year, in the first [month], the first [day] of the month, the waters were dried up from off the earth: and NOAH removed the covering of the ark, and looked, and, behold, the face of the ground was dry." Noah, a prophet of the Lord was unaware of a stowaway murderer and Satan worshiper on his boat? God stated that only Noah and his family aboard the boat survived.

I could keep going through the novel, but I think you understand why I disliked this book. Although it had an interesting premise, it was a great disapointment to me. I felt like too many liberties were being taken with Biblical truth and couldn't enjoy the story, no matter how well written. 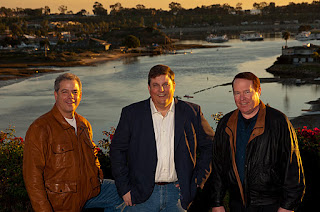 Tom Pollack (center) has a passion for sailing, which led him to a friendship with Roy Disney, and ultimately to the release of Walt Disney Pictures' critically acclaimed motion picture, Morning Light. The film is based on Tom's original idea of documenting the exploits of a group of college-aged sailors recruited to compete against seasoned pros in the Trans-Pacific race from Southern California to Hawaii.

Tom graduated from Loyola Marymount University with a bachelor's degree in political science. He resides in Dana Point with his wife, Jennifer, and their two children. Tom serves as President of the Mission Basilica School Foundation in San Juan Capistrano and the Chairman of ExplorOcean, Newport Beach's popular nautical museum.

Jim Alves (left) recently completed a 25-year career in bond sales and trading. He graduated from The University of Massachusetts with a bachelor's degree in finance and economics. He currently is Chief Executive Officer of Prometheus Holdings, a financial consulting firm. Jim resides in San Clemente, California with his wife Jackie and their two young boys, having successfully launched two older sons from the nest.

John Loftus (right) spent 23 years at Pacific Investment Management Company (PIMCO), where as a Managing Director he focused on new product development and marketing. A graduate of Stanford University and the Stanford Graduate School of Business, his writings have been published in various financial journals and textbooks. Now President of Cascada Productions, John is also active in philanthropy and the non-profit sector. An Ohio native, John resides in Newport Beach, California, with his wife, Lori. They have three grown children and two grandchildren.


Glass Road Public Relations provided this book free for review.
For a brief introduction on the differences between the KJV and the IV of the Holy Scriptures, click HERE. For more information on the Restored Gospel of Jesus Christ visit Restored Gospel.com for articles and study guides as well as a full, searchable database for all 3 books of scripture and Church history.
Posted by April Erwin at 12/30/2011

That's too bad the book didn't live up to your hopes. The description sure does sound awesome! Thanks for sharing your review!

I agree, Jeremy. I do think the writing was good, it will be interesting to see what his follow up book is like. Thanks for stopping by. :)