Song Stuck on the Head: Heavy In Your Arms by Florence and the Machine

I was so excited to see Ross Lawhead listed on the tour, I just knew the son of Stephen Lawhead must have inherited his dad's talent right? WOW did he. After this book, I won't need to remind you who his famous dad is, his writing stands up on it's own two feet and knocks a solid punch.

The Realms Thereunder, is his debut novel and the first in a series. Suspenseful entertainment mixed with the right balance of intelectualism and heart. It left me counting the days until September 2012 when the sequel releases. The story is a blend of the fantastic myths and legends of the Brittish Isles with present day danger and turmoil. Dragons and Trolls in modern day Scotland. Sleeping knights hidden in caves awaiting the day they're called forth to fight for righteousness. Freya and Daniel's tale is told in masterful blend of story threads from past and present. The descriptions are so clear, I'm thinking Ross might actually have seen the underground city. He certainly set the bar very high for other writers in his genre. 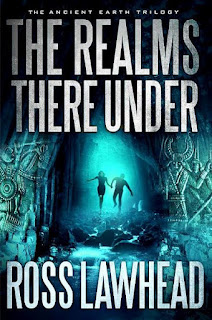 Ancient legend tells of an army of knights that will remain sleeping until the last days.

The knights are waking up.

A homeless man is stalked by a pale, wraithlike creature with a mouthful of needle-sharp teeth. Maimed animals and a host of suicides cluster around a mountain in Scotland. And deep beneath the cobbled streets of Oxford, a malicious hoard besieges a hidden city.

Freya Reynolds is a university student with a touch of OCD and an obsession with myth and folklore. Daniel Tully is living rough on the streets of Oxford, waging a secret war against an enemy only he can identify. Years ago, they found themselves in a world few know is real. They have since gone their separate ways and tried to put that adventure behind them.

But the mythical world is now bleeding into our reality-a dark spiritual evil that is manifesting itself in forgotten corners of the British Isles. Alex Simpson is a Scottish police officer who specializes in hunting mythical creatures. Together, they must confront the past, the present, and points beyond to defeat the ultimate threat to humanity.

Nothing they've seen so far prepares them for what awaits . . . in The Realms Thereunder. 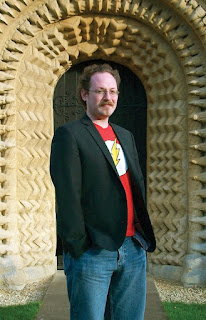 Ross Lawhead comes from a literary household. He has collaborated with his father, Stephen R. Lawhead, on a trilogy of speculative fiction, written and illustrated a graphic novel, and published two volumes of “awful” poetry in a series called “The Colour Papers.” He lives in Oxford, England and this is his first full-length novel. For more of Ross’s musings on comics, movies, books, and culture, visit rosslawhead.com/blog/

Check out the other tour members blogs:

In conjunction with the CSFF Blog Tour, I received a free copy of this book from the publisher.
Posted by April Erwin at 2/22/2012

I didn't love this one, but I'd come back for more.

Hi, April, so glad you liked this one so much. I'm beginning to see a pattern--more young adults and teens liked it than us older folk. ;-) But I'm with Margaret--I'd definitely read the next one.

Becky, does this mean I still get to count myself as a 'Young Adult'? YAY! :)

I can see where these would appeal to a younger audience, being the characters stories are told at least half as children. There are a lot of YA loving adult readers too, so it's nice to see the overlap. I like the idea of an entire family being involved in the books and it not being just for the kids or just the adults. And as this was his debut novel, I expect the next one will be even better.

Thanks for stopping by and sharing. :)