Hannah is my kid of woman, I love her courage and passion. She's spunky without being a spitfire. The spitfire is her little sister Marty. Love that child. Every laugh out loud moment in this book involved her and her brother Andy. The humor was a nice balance to the drama involved with a truly snake in grass lawyer set on controlling Hanna at all costs.

Tracie Peterson has again pulled me into a historical setting that was both somewhat familiar and completely new at the same time. There was much about the state of Texas and their position during the Civil War that I didn't know. The well drawn background served as a perfect backdrop to the this story about loss, love and ultimately faith.

A really great book, can't wait to see the sequel. I hope at some point we get little Marty's story, I can only imaging the kind of woman she'll grow to be. 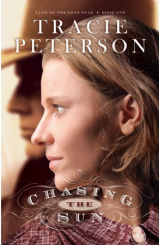 When her father disappears in war-torn Mississippi, Hannah Dandridge finds herself responsible not only for her younger siblings but for the ranch her father recently acquired on the Texas plains. Though a marriage of convenience could ease her predicament, she determines to trust God for direction.

Wounded soldier William Barnett returns to his home only to discover that his family's ranch has been seized. Though angry and bitter at this turn of events, he's surprised to discover that it is a beautiful young woman with amazing fortitude who is struggling to keep the place running.

Hannah, desperate for help, and William, desperate to regain his family's land, form an uneasy truce. But nearby Comanche tribes, the arrival of Confederate soldiers, and a persistent suitor all threaten the growing attraction that builds between them. Will they be able to set aside their own dreams and embrace the promise of a future together?

If you would like to read the first chapter of Chasing The Sun, go HERE.

Tracie Peterson is the bestselling, award-winning author of more than 85 novels.

She received her first book contract in November, 1992 and saw A Place To Belong published in February 1993 with Barbour Publishings' Heartsong Presents. She wrote exclusively with Heartsong for the next two years, receiving their readership's vote for Favorite Author of the Year for three years in a row.

She teaches writing workshops at a variety of conferences on subjects such as inspirational romance and historical research.

Tracie was awarded the Romantic Times Career Achievement Award for 2007 Inspirational Fiction and her books have won numerous awards for favorite books in a variety of contests.

Making her home in Montana, this Kansas native enjoys spending time with family--especially her three grandchildren--Rainy, Fox and Max. She's active in her church as the Director of Women's Ministries, coordinates a yearly writer's retreat for published authors, and travels, as time permits, to research her books.
Posted by April Erwin at 3/07/2012