Due to a delay in shipping, my book hasn't arrived yet, so once I've received the book and read it, I'll post a review. In the mean time, here is a fantastic peak into what looks to be a very promising novel. 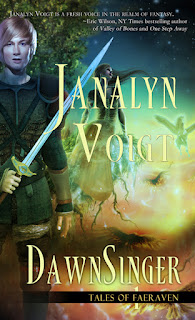 The High Queen is dying... At the royal summons, Shae mounts a wingabeast and soars through the air to the high hold of Faeraven, where all is not as it seems. Visions warn her of danger, and a dark soul touches hers in the night. When she encounters an attractive but disturbing musician, her wayward heart awakens. But then there is Kai, a guardian of Faeraven and of Shae. Secrets bind him to her, and her safety lies at the center of every decision he makes. On a desperate journey fraught with peril and the unknown, they battle warlike garns, waevens, ferocious raptors, and the wraiths of their own regrets. Yet, they must endure the campaign long enough to release the DawnKing—and the salvation he offers—into a divided land. To prevail, each must learn that sometimes victory comes only through surrender.

A new speculative fiction story releases this summer that captures several paradoxical truths, including: freedom comes through sacrifice – AND – victory comes through surrender. allegorical fantasy readers will be spellbound by the incredible imagery and symbolism throughout DawnSinger, authored by Janalyn Voigt. Some of the key points in the book include:

Freedom through sacrifice. When the willful but reverent main character, Shae, learns her secret identity, she has to decide whether to accept her true calling. Although it may cost her everything, the salvation of a nation hangs in the balance. Shae represents the church. We each must lay down our will and our lives to bring freedom to others.

Overcoming prejudice with unity. In DawnSinger, the clash is not over color of skin but between classes of being. Elderland was already inhabited by the Elder nation when the Kindren entered it from another world through a gate that closed behind them. The Elder accepted the Kindren's occupation of Elderland because they didn't want to live in the areas where they settled—areas within reach of garns (goblenesque creatures) and welkes (giant birds of prey). DawnSinger opens as an unknown enemy stirs strife between Kindren and Elder in an attempt to divide and conquer Elderland. As a result, the alliance of Faeraven, a group of Kindren kingdoms ruled by a widowed High Queen, begins to fall apart. This story arc, which spans three novels, is based in large part on Voigt’s father's experiences of prejudice as a half-breed Native American.

Serving rather than ruling. As the High Queen's health fails, Kai, the hero of DawnSinger, must choose whether to reign and rule in his homeland or to continue in service to the new High King at her death. Kai's decision inspires Shae to make her own.

Conquering fear by not letting it consume you. In Pilaer Hold, an ancient place of defeat for the Kindren, wraiths rush toward Kai and Shae's other protectors. They draw their swords, but the more wraiths they dispatch, the more arise. They learn that to defeat fear, something else is needed.

For fun and to benefit the readers of this blog, Shae of Whellein, the main character from DawnSinger, first of the epic fantasy trilogy, Tales of Faeraven, granted a rare interview to Janalyn Voigt, her author.

Janalyn: Tell me Shae, why you always seem to be at the center of trouble.

Shae: I often wonder that too. Problems just seem to follow me around. Maybe I’m too much like my brother, Daeven. He didn’t want to settle down to the responsibilities of a first-born son, so he ran away to sail the seas. They say wreckers lured his ship to its doom on the Coast of Bones. I don’t want to end up like Daeven. If only I could be more like my twin sister, Katera. She seems made for a simple life. It doesn’t help that sometimes visions warn me of lurking evil, or that souls touch mine in the night.

Janalyn: Visions of evil? Souls touching in the night? That sounds serious.

Shae: Things have gotten intense ever since Kai rode into the garden at Whellein Hold on the back of a wingabeast, a kind of winged horse ridden only by Guardians of Rivenn. Kai brought a summons that changed my life forever. But he was followed.

Shae: Ask Kai. He won’t tell me his secrets, no matter how irritated I become.

Janalyn: For those who haven’t met him, who is Kai?

Shae: I’m not certain I really know. He’s always been there, in the background of my life. But things have changed, and I’m not sure where I fit in his life any more.

Janalyn: Won’t he tell you that either?

Shae: He says he loves me, despite everything. I’m grateful for that anyway, especially after what happened that night with Freaer.

Shae: Beyond the fact that he’s a musician, I don’t exactly know who Freaer is either. He fascinates me, and whenever he’s near I don’t feel quite – safe.

Janalyn: But something happened with this Freaer you don’t know?

Shae: Don’t look so smug when you say that! I’d answer your question but Kai told me not to tell.

Janalyn: [Sigh] I begin to understand why trouble follows you around. So, is there anyone else we should know about?

Shae: Well, there’s also Elcon, heir to the throne of Faeraven. I’m drawn to him, and he seems kind. He’s sad right now because his mother is dying, and I think he’s a little scared. He’s young to become a High King, especially with trouble brewing in Elderland.

Janalyn: Do you think the evil you mentioned earlier lies behind the trouble in Elderland?

Shae: I don’t doubt it. There’s an answer somewhere in all the riddles that surround me. I know it. I only hope I can find it in time, and that I’ll have the courage to face the trials that come, no matter what they cost me. Maybe then I can redeem myself a little.

Janalyn: Thanks for being so candid, Shae. I appreciate this chance to get to know you better.

Shae: Thanks for thinking of me. I guess we’ll both find out what happens as you continue writing. What are the names of your novels again?

Janalyn: I’m glad you asked. The three books in the Tales of Faeraven trilogy are DawnSinger, Wayfarer and DawnKing.


ABOUT THE AUTHOR:
Janalyn Voigt’s epic fantasy trilogy, Tales of Faeraven, starting with DawnSinger, is published by Harbourlight Books. Janalyn also writes in the western romance genre. She is represented by Barbara Scott of Wordserve Literary. Her nonfiction publication credits include Focus on the Family, Scripture Press (now David C. Cook) and Pentecostal Evangel. She serves as a literary judge for several national contests and is an active book reviewer. Her memberships include ACFW and NCWA. Janalyn lives in a quiet corner of the Pacific Northwest, where she discovers worlds of adventure in the great outdoors.

Hi, April. Sorry your book was delayed. Thanks for participating in the blog tour.

Not a problem Janalyn, I'm glad to be a part of the tour. Delays happen and it just adds to the anticipation. :) Thanks for stopping by.