Song Stuck on the Brain: Phantom of the Opera - In surfing youtube I found this version sung by Sarah Brightman and Antonio Banderas. I didn't know Antonio Banderas sang. I thought it was a cool rendering for the Phantom's voice.


First let me apologize for the late post. This should have gone live yesterday, but my internet crashed and it just came back this morning.

You all know what a huge fan I am of Stephen Lawhead's work, so if you're a follower of my blog, you're already familiar with the first 2 books in the Bright Empires series - The Skin Map and The Bone House. I was on pins and needles waiting for what I thought was the last book in the series. Imagine my surprise (and excitement!!) when I discovered there are 2 more books to come.

The Spirit Well picks up right where it left you suspended with the last book. Kit wakes up in the bone house and remembers the journey to the spirit well. From there, the story continues at break neck speed across multiple realities and time. Kit and Mina find each other again, we  discover how the skin map came to be, and even get a taste of a translation for the symbols on the map.

There is so much that happens - too much to even try to explain. And why would you want me to give away all the spectacular secrets? It's all those juicy little secrets, twisty plot turns and outright surprises that continue to make this series unforgettable. It's one more hit for Mr. Lawhead and one more tasty treat for his readers who know that's what we should expect.

If you have not read The Skin Map or The Bone House, those are must reads first, the story won't make sense otherwise. If you're a fan of great fiction with science and faith woven into the foundation, then you won't want to miss this series. 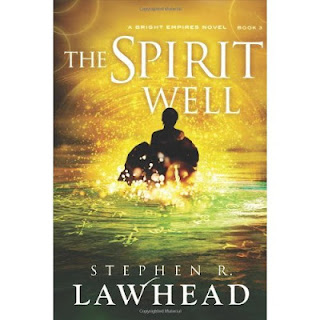 The search for the map—and the secret behind its cryptic code—intensifies in a quest across time, space, and multiple realities.

But what if the true treasure isn’t the map at all . . . what if the map marks something far greater?  Something one world cannot contain? Those who desire to unlock that mystery are in a race to possess the secret—for good or evil.

Kit Livingstone is mastering the ability to travel across realities using ley lines and has forged a link from the Bone House, a sacred lodge made of animal bones, to the fabled Spirit Well, a place of profound power.

His friend Mina is undercover in a Spanish monastery high in the Pyrenees, learning all she can from a monk named Brother Lazarus. Still determined to find Kit, she is beginning to experience a greater destiny than she can fathom.

Cassandra Clarke is overseeing an archaeological dig in Arizona when a chance encounter transports her to 1950s Damascus. There, she finds herself unwillingly drawn to the Seekers—the last living remnants of the Zetetic Society who need her help to track down the missing Cosimo Livingstone and his grandson Kit.

But there are darker forces at work in the universe whose agents always seem to be one step ahead of the rest—and they’re all desperate to gain the ultimate prize in this treasure hunt where the stakes increase at every turn. At the heart of the mystery lies the Spirit Well.

﻿ ﻿ Stephen Lawhead is an internationally acclaimed author of mythic history and imaginative fiction. He was born in 1950, in Nebraska in the USA. His early life was lived in America where he earned a university degree in Fine Arts and attended theological seminary for two years.

Stephen's non-fiction, fiction and children's titles have variously been published in twenty-four foreign languages. He has won numerous industry awards, and in 2003 was awarded an Honorary Doctorate of Humane Letters by the University of Nebraska.
Visit the Author on Facebook: http://www.facebook.com/StephenRLawhead