Kregel: The Sons of Jude by Brandt Dodson

The Sons of Jude

Gritty, and a little hard boiled. The story has a feel of authenticity that you expect from an author that has walked in his characters shoes. I enjoyed it, it had a different feel and tone than the books I typically review, but it's nice to broaden my horizons. Although I read across a lot of genres, I usually only review Christian Fiction. Not to say this isn't Christian, The Sons of Jude has a strong moral  message, but the setting is honest and true to life. Be prepared for drinking, bars, strip clubs and a rougher crowd. It's handled tastefully. Nothing gratuitous or overly descriptive, nothing felt excessive or out of place for the story, but I know some would prefer to know this before reading. Overall, it put me in mind of authors like Shawn Grady, J. Mark Bertrand, maybe even a little Clive Cussler or James Patterson. If you enjoy these authors, give Brandt Dodson a try. You'll feel like you're walking the cold and windy beat of Chicago with him. 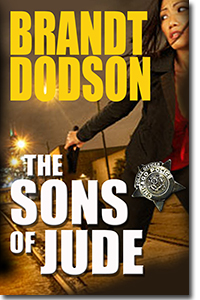 The body of a young woman is found in a dumpster in Chicago and detectives Andy Polanski and Frank Campello are charged with finding the killer. The two are polar opposites. Polanski is the son of a disgraced Chicago police officer and is fastidious about his reputation. He has also recently been transferred from another district having blown the whistle on some corrupt cops. Campello, however, takes a live-and-let-live approach to his life and job.


It soon becomes clear, as another young woman--a potential witness--is murdered, that a sex-trafficking operation in Chicago is preying on illegal aliens. As the ill-matched pair dig deeper, an influential alderman and his son are implicated. Then Polanski is framed for a narcotics offense, devastating the cases against the corrupt officers and the alderman. Only when Campello is challenged by a local minister, whom he meets when visiting Polanski, does he find the motivation to seek justice.

Read an excerpt her HERE

Brandt was born and raised in Indianapolis, Indiana, which he would later choose as the setting for his Colton Parker Mystery series. Although he discovered in grade school that he wanted to be a writer, it would be another twenty-one years before he would put pen to paper.

“I knew in fifth grade that I wanted to be a writer. Our teacher had given each of us a photograph which we were to use as inspiration for a short story. The particular photo I was given was of several young men playing handball in New York City. I don’t remember all of the particulars of the story now, but I do remember the thrill that writing it gave me.”

In high school, Brandt’s English teacher uncovered his growing desire and encouraged him by saying: “If you don’t write, you’ll regret it the rest of your life.”
Posted by April Erwin at 12/12/2012

I liked this book :)

Thanks for sharing that with me, Teena. I'm glad you enjoyed it too. Thanks for stopping by. :)