Reign: The Chronicles of Queen Jezebel by Ginger Garrett

Today I'm reviewing a book on behalf of NetGalley.com:

The Chronicles of Queen Jezebel

MY TAKE:
I should have known better. That was the thought that kept crossing my mind as I read Reign. Not because the writing was bad or the story telling confusing. No, I didn't find anything wrong with the writing itself, in fact, Ginger Garrett is a very talented writer.

No, what I should have known better was that I wouldn't enjoy the story. I knew the account of Jezebel and Ahab, of the curse God brought down on the Israelites and of the many horrible things that occurred when she brought her false gods and sacrifices with her. I knew it wasn't going to end well. Although I don't mind a sad ending or a good drama, I like a good ending and I try to choose my review books accordingly.

So why did I pick this book to review, you might ask? First the cover intrigued me (I know, you can't judge a book by it's cover...). Second, I like history. I'm just curious enough to want to understand more of the culture that surrounded the accounts in the Scriptures. It's true, there is not nearly enough written in the Holy Bible to tell Jezebel's story in depth, or any of the others involved. But I had hoped that the historical representation would be interesting and entertaining.

For some, I suppose it will be. For me, I couldn't handle it. Knowing there are child sacrifices, sexual rites and other horrors in honor of the false gods is one thing. It gets filed in the "logic" side of my brain. Reading about it, seeing it come to life and feeling sickening horror - well that falls under the "emotion" side of my brain. It's too dark and I don't handle it well. (Nightmares followed.) Although I don't believe she's extravagant in anyway, Ginger Garrett is honest and forthright in her representation of the culture. It's the sign of a talented writer when a scene can come to life so clearly.

Also, Jezebel's nature and wildness is an interesting take on who she might have been. Maybe even very accurate, the Bible definitely hints at a crazed woman. The author tries to create a story line that allows us to understand her better, to even be sympathetic toward her, but I found that very difficult. In my mind I don't feel like that was the point of the account in I and II Kings. Do I pity her, wish she had repented and turned to the one true God? Absolutely! But she didn't and her tale seems to stand more as a testament and witness against those who would defy God. A witness we should know and be aware of, but not one I find entertaining or enjoyable as fiction, no matter how well written. Every reader has their own tastes however, so choose now knowing more than I did when I picked up the book and don't judge the book by it's cover. :)
ABOUT THE BOOK: 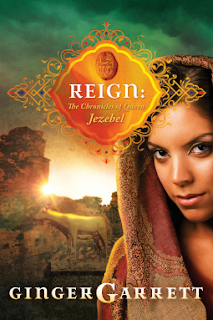 Beyond the Drama, Her Heart Was Real
From the moment her marriage to prince Ahab thrusts her into the intrigues of palace life, Jezebel’s exotic beauty opens doors and her will breaks down walls. Torn from her homeland and wed to power in a strange country, Jezebel vows to create a legacy and power all her own. Some might call her a manipulative schemer, bent on having her way. But they don’t know the whole story, and she was much, much worse. As she moves through the halls of power, her heart struggles between devotion to the gods she worships, the prince who loves her, and her thirst for revenge. She sparks a battle between her strangely powerless gods and the God of palace administrator Obadiah—a God who confronts her with surprising might. She will fight, though victory may cost her everything. 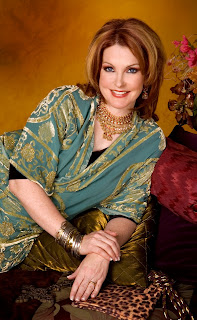 Ginger Garrett is the critically acclaimed author of Chosen: The Lost Diaries of Queen Esther, which was recognized as one of the top five novels of 2006 by the ECPA, and Dark Hour. An expert in ancient women’s history, Ginger creates novels and nonfiction resources that explore the lives of historical women.

Her newest release is Beauty Secrets of the Bible, (September, Thomas Nelson) based on the historical research that began in her work on Chosen. The book explores the connections between beauty and spirituality, offering women both historical insights and scientific proofs that reveal powerful, natural beauty secrets.

A frequent radio guest on stations across the country, including NPR and Billy Graham’s The Hour of Decision, Ginger is also a popular television guest. Her appearances include The Harvest Show, Friends & Neighbors, and Babbie’s House. Ginger frequently serves as a co-host on the inspirational cable program Deeper Living.

In 2007, Ginger was nominated for the Georgia Author of the Year Award for her novel Dark Hour. A graduate of Southern Methodist University with a degree in theatre, she is passionate about creating art from history.

I received a copy of this novel free from the publisher in exchange for my honest opinion.
Posted by April Erwin at 6/07/2013

A frequent radio guest on stations across the country. wow, thats great!