A Noble Groom by Jody Hedlund

Song Stuck on the Brain: Hiding Place by Miranda Frigon, from the TV show Primeval New World and sung by one of the primary actresses. Beautiful song.


﻿
It's a grim community (no pun intended) for these German settlers in 1881 Michigan. Annalisa is from a world where women have little more value than the farm stock they help care for. The men there all make me want to beat them over the heads with a wooden spoon. So Carl is a breath of fresh air for this town. His aristocratic upbringing has taught him to see women with a different respect. This scavenged life in the New World may be rough for him, but it also brings out his better side. One that makes a mark on the small village he lives in. His secrets come close to destroying what he's built, but it's the journey to love and hope that both Carl and Annalisa find that make this book a high point on my reading list this year. It's a beautiful love story. 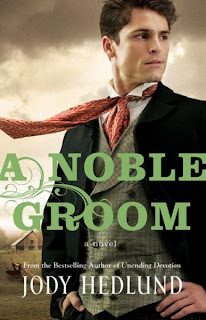 Recently widowed Annalisa Werner has the feeling her husband was murdered but can’t prove it.
Alone with her young daughter in 1881 Michigan, she has six months left to finish raising the money needed to pay back the land contract her husband purchased, and the land is difficult to toil by herself. She needs a husband. With unmarried men scarce, her father sends a letter to his brother in the Old Country, asking him to find Annalisa a groom.
For nobleman Carl von Reichart, the blade of the guillotine is his fate. He’s been accused and convicted of a serious crime he didn’t commit, and his only escape is to flee to a small German community in Michigan where he’ll be safe. He secures a job on Annalisa’s farm but bumbles through learning about farming and manual labor.
Annalisa senses that Carl is harboring a secret about his past, yet she finds herself drawn to him anyway. He’s gentle, kind, and romantic–unlike any of the men she’s ever known. He begins to restore her faith in the ability to love–but her true groom is still on his way. And time is running out on them all.

1. Why did you write A Noble Groom?

A Noble Groom is the story of a German immigrant farming community in central Michigan during the 1880s. I was drawn to write this novel for a number of reasons. One is that I live in central Michigan and am fascinated by the history of the area. Since there have been so few novels set in Michigan, I’m delighted to pioneer the way into bringing my state’s history to life for today’s readers.

Another reason I chose to focus on this immigrant community is because of my own German roots. My father’s family emigrated from Germany and eventually many of them became farmers.

2. How did you develop the initial story idea and plot?In my research I ran across a group of German immigrants that settled in the Thumb area of Michigan. This particular group had emigrated from Saxony Germany to Sanilac County, Michigan, and formed Colonial Saxonia. As miners they had originally intended to settle in the Upper Peninsula and mine there, but due to reports on the severity of the weather in the northern part of Michigan, they decided to settle instead farther south, in Forestville.

The land around Forestville had once been a former logging community and was covered with a tangle of dead trees, stumps, and fast-growing brush. The soil was rich for farming, but it would take hard work to make it ready. In writing A Noble Groom, I wanted to bring to life this era and the difficulty these immigrants faced in settling in a strange land.

3. What is the underlying theme or message of the novel? Is this what you set out to write? There are actually several underlying themes woven throughout the story, including persevering through difficult times, not running away from your problems, and learning to let go of bitterness and forgive.

Another particularly strong theme is something that the heroine grapples with—feeling unimportant to God. As a German wife and mother living in a male-dominated society, she has always believed that God is too busy for her. She thinks God has more important matters and people to concern Himself with than a poor, lonely widow. In the end, she begins to understand the true nature of God’s love and its extent to "the least of these."

4. What is the take-away message you want readers to receive after reading your book? I pray readers will find the story of the immigrants inspiring as they persevere through their own challenges. It’s my hope that the courage of the immigrants will give readers fresh determination and hope.

Most of all, I want them to know God does indeed care for them. Even when He seems busy with more important people and matters, I hope readers will have a new awakening of His nearness, especially during their darkest moments of pain.

Jody has written novels for the last 20 years (with a hiatus when her children were young). After many years of writing and honing her skills, she finally garnered national attention with her double final in the Genesis Contest, a fiction-writing contest for unpublished writers through ACFW (American Christian Fiction Writers).

Since then she’s gone on to publish numerous best-selling and award-winning books. To read more about her writing journey click HERE.
Posted by April Erwin at 7/23/2013