Song Stuck on the Brain: 76 Trombones from Music Man

One is seeking to recreate her life yet again and learns to truly live from a group of Gullah nannies she meets on the island. The other thinks she's got it all together until her sister's imminent death from cancer causes her to re-examine her own life and seek the healing and rebirth her troubled sister managed to find on St. Anne's Island.

Strong female protagonists are forced to deal with suicide, wife abuse, cancer, and grief in a realistic way that will ring true for anyone who has ever suffered great loss.

"This is another thing I know for a fact: a woman can't be an island, not really. No, it's the touching we do in other people's lives that matters when all is said and done. The silly things we do for ourselves--shiny new cars and jobs and money--they don't mean a hill of beans. Honor taught me that. My soul sisters on this island taught me that. And this is the story of true sisterhood. It's the story of Honor, come and gone, and how one flawed woman worked miracles in this mixed-up world."

"...a special sisterhood of island women whose wisdom and courage linger in the mind long after the book is closed."
-NEW YORK TIMES best-selling author SUSAN WIGGS 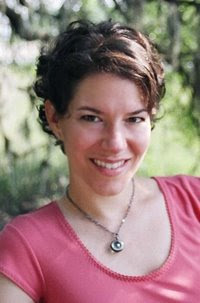 Nicole Seitz is a South Carolina Lowcountry native and the author of The Spirit of Sweetgrass as well as a freelance writer/illustrator who has published in numerous low country magazines. A graduate of the University of North Carolina at Chapel Hill's School of Journalism, she also has a bachelor's degree in illustration from Savannah College of Art & Design. Nicole shows her paintings in the Charleston, South Carolina area, where she owns a web design firm and lives with her husband and two small children. Nicole is also an avid blogger, you can leave her a comment on her blog.

Seitz's writing style recalls that of Southern authors like Kaye Gibbons, Anne Rivers Siddons, and Sue Monk Kidd, and this new novel, which the publisher compares to Kidd's The Secret Life of Bees, surely joins the ranks of strong fiction that highlights the complicated relationships between women. Highly recommended, especially for Southern libraries.
Posted by April Erwin at 4/09/2008

Thank you for posting the review!
Nicole