Today's book is brought to you by Glass Roads PR. 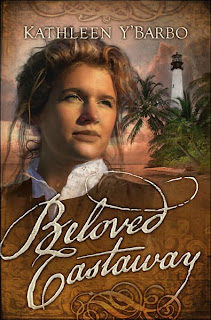 Isabelle Gayarre, fleeing a life of servitude, refuses to be owned by anyone, yet soon finds her heart in danger of being possessed by the godless Captain Josiah Carter. Can Isabelle trust him to help her escape without losing her heart? Josiah Carter, running from demons of his own, is stirred by the presence of the beautiful woman seeking refuge on his ship. Realizing that a runaway slave can never be his, legally or otherwise, a storm begins to brew within. Will their love ever reach a safe haven, or is it doomed to wreck upon the jagged reefs of the Fairweather Keys?

My Take:
Isabelle's tale is a compelling one. I was a little confused by the terms of her slave status and her reasons for fleeing in the begining of the book, but those were made clear later. The story is full of action and grace. More specifically, the Grace of God. Josiah's caracter was the most intriguing for me. I enjoyed seeing his character grow and change as he saw himself through God's eyes. The relationship between Isabelle and Josiah is both very proper and yet daring at the same time. It's hard to comprehend in our present day, how being an Octaroon could make marriage or freedom such a frightening legal issue, yet it was. The fact that the couple was willing to honor those laws, even when they didn't agree with them, was moving. It made me wonder if I could do that if I were in their shoes.
Beloved Castaway was a good romantic read and it made me think, which in my opinion is something any good book should do.

Kathleen Y'barbo Miller is a tenth generation Texan and a mother of three grown sons and a teenage daughter. She is a graduate of Texas A&M University and an award winning novelist of Christian fiction whose first published work jumped onto the Christian Booksellers Association bestseller list in its first month of release. Kathleen is a former treasurer for the American Christian Fiction Writers, and is a member of Inspirational Writers Alive, Romance Writers of America, Words for the Journey, and The Writers Guild. In addition, she speaks on the craft of writing to schools and writing groups, and teaches an online creative writing course through Lamar University in Beaumont, Texas.
A.
Posted by April Erwin at 4/28/2008