Fluff Power and Beyond!

Song Stuck on the Brain: Pure Love by Ronnie Milsap


My sister Angel works the same place that I do. Sometimes that can be especially entertaining. She was talking to our friend and co-worker Karen, when she started joking about being super fluffy. The next thing I know, Angel is standing in my office with a sign saying SUPER FLUFF taped to the front of her shirt and a blue denim jacket tied around her neck as a cape. It was pretty funny. Angel started singing Super Fluff, I'm super fluffy... to the tune of Super Freak. That was REALLY funny. She had us all giggling. She asked us what our super hero names would be. I chose Jet Puff (marshmallow brand name) and Karen chose Cream Puff.

They went on back to work.... My brain went into over drive. I could not leave it alone. Hence the following idea for a new cartoon series on Nickelodeon.

Meet The Power Fluff Girls…. Super Fluff, Jet Puff and Cream Puff. The adventuring heroines that float like cotton candy and sting like a sugar rush. They use their Fat Power to fight evil doers like Super Atkins and Vegan Girl. Although they fight the good fight everyday from their super secret underground Gingerbread lair, they are most haunted by the evilest of evil doers – Flambé. The torch wielding maniac that dreams of nothing more than sticking it to them in his House of S’More Pain. Stay tuned as the Sweeties of Superdome fight for fluffies everywhere! 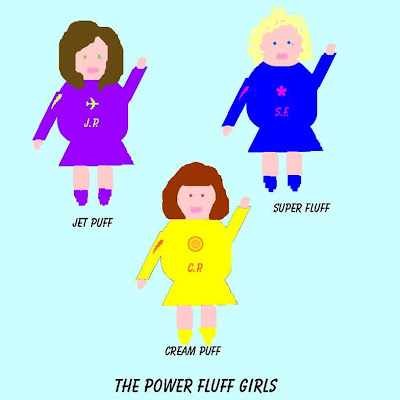 No fair being superheroes without me.

I'm sorry, Amy! You can join our troupe any time. What would you like your superhero name to be?

When we told my niece Emily about it last night (she's six), she said she wanted to be Pink Fluff... who Farts. Her words not mine. Angel said, "So you'll be Pink Fluff, the hero that has a rootin tootin good time?"

Sad but true. We all laughed.

That is too funny! :) I'll have to think about my name...maybe Crafty Fluff. :) hehehehe...she runs with scissors...

Running with scissors, that could be a really keen weapon. :) Angel and I were joking that since you've been loosing fluff and you're so much smaller than we are, you could be Mini Fluff or Toasted Puff (cuz your melting...) Ooo, or you could be Lucky Charms! You could be all those awesome little marshmallows in one. :)