Song Stuck on the Brain: Stupid Cupid by Mandy Moore

It is time for a FIRST Wild Card Tour book review! If you wish to join the FIRST blog alliance, just click the button. We are a group of reviewers who tour Christian books. A Wild Card post includes a brief bio of the author and a full chapter from each book toured. The reason it is called a FIRST Wild Card Tour is that you never know if the book will be fiction, non~fiction, for young, or for old...or for somewhere in between! Enjoy your free peek into the book! 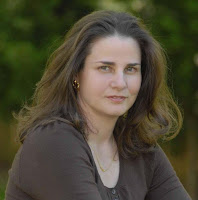 Amy Deardon is a skeptic who came to faith through study of the historic circumstances surrounding the death of Jesus. This is her first book.


“Give me a lever long enough, and a place to stand, and single-handed I can move the world.”


The ancient Qumran Mountains were hard and dusty, fists of rock pushing upwards to strike the face of the sky. As the helicopter trailing the two paragliders banked to the left, Benjamin watched the lead figure closely. Sara soared between two peaks, smooth, so smooth, as she dodged a cliff and spun another turn in her ascent.

Benjamin shook his head. “She flies that thing like it was a part of her.” He saw his pilot, Caleb Mendel, glance over at him.

“They’re looking good,” Mendel said. The earphone in Benjamin’s helmet crackled, the voice tinny and mechanical from the transmitter.

The two paragliders dangled about twenty feet below the arched cloth wings, the fanned lines passing in a spread to their hands, but Sara flew far ahead—silhouetted against the next cliff now, too close to it. Even as he watched, she executed another sharp turn and dove down, circling out of it and up again as the giant fan strapped to her back pushed the wing’s edge forward. Benjamin let out his breath.

“She sure likes to cut it fine,” Mendel said. “That gust of wind almost knocked her against the rock.”

There were three and a half days until FlashBack.

The pilot touched the controls, and Benjamin felt the slight dip as the helicopter rolled to the right on a longer trajectory to keep from staying ahead of the gliders. Thumpa thumpa thumpa…he felt the vibration as the rotors of the helicopter shook the pod. They were going around the turn now and the waters of the Dead Sea spread out before them, glinting red in the late sun. Several small boats floated near a trawler—Benjamin knew they were searching for the weak signal of a nuclear battery.

He was thinking of FlashBack, and the time machine.

Mendel glanced over at the trawler. “It doesn’t look like they’re wrapping up yet. Can they continue to search in the dark?”

“Not as well, but they will. If they find the data now, it will let some pressure off.”

He shifted in his seat. The men on the boats were searching for the data capsule that he wouldn’t deposit in the Dead Sea for another week, yet it may have been there since before the Roman conquest of Jerusalem. It was unclear how the time strands worked.

“If it’s there, it could have corroded through,” the pilot said.

Benjamin shook his head. “Unlikely.” The titanium capsule was sixteen inches in diameter with extraordinarily tight seals. More probable that it was masked from detection by a two-thousand-year-old coating of deposited salt.

He turned his attention back to the soldiers riding on the air currents. How different would it be when they went back?

“Let’s finish up,” he said. The sky was bruising dark as the sun fell, and the gliders still had a good ten minutes to go before they landed.

Rebecca Sharett, behind Sara, was having trouble keeping to a smooth course. Benjamin knew that she wasn’t confident in the air, but really, it wasn’t critical, since they would use the paraglider only as a desperate measure to deliver the information capsule so that it could be carbon-dated. It was treacherous, that was for sure.

Sara cornered another turn, and Benjamin smiled despite himself. She was so smooth. Not just this, but everything to which she touched her hand, or her mind. Lately she seemed to be in his awareness more and more—

Don’t think about her.

The helicopter turned course, following the gliders through the hard range. There were long shadows over the terrain.

“Excellent time,” Benjamin replied. “Sara would be running under three and a half hours if she weren’t turning back all the time to wait for Rebecca.”

From the top of his helmet, the pilot pulled down infrared goggles against the growing dark. Full sunset now, deep shadows merged to black on the ground. Benjamin reached for his own set.

To the west the city lights of Jerusalem scattered the infrared image to a green shadow on the periphery of his vision. As they topped the last ring of mountains, he watched Sara glide several hundred feet farther, turn off the fan’s engine on her back, and begin her landing cone of intention. He shook his head. Despite the darkness, Sara barely slowed. She was going to get herself killed.

The new Israeli military complex loomed ahead: multiple buildings guarded by a wickedly sharp perimeter fence and towers. It had been locked down for the past week in preparation for FlashBack. He watched the pilot flip on the microphone to receive clearance for landing in the restricted airspace.

“We’re set,” Mendel said after a moment. “They’re putting on the lights now.”

The helicopter jostled in the air current, and Mendel pulled up on the controls. “Wind’s picking up.”

Benjamin glanced at the lights of the complex, then back at his soldiers. Sara touched down, the cloth wing collapsing behind her like a giant blanket. The two men on the transport vehicle ran forward and began pulling out the wing before she’d even unclipped the harness. Rebecca began to circle. The helicopter whipped through one last circuit as Mendel began their own landing sequence.

Then the pilot made a sudden move.

Benjamin looked over. “What is it?”

The pilot stared hard at the residential building through his infrared goggles, as if trying to see the afterimage of something fleeting. Benjamin hadn’t seen anything himself.