Song Stuck on the Brain: My bologna has a first name, it's MAYER....

I've been a big fan of Deeanne from her very first book. She hasn't disappointed me yet. In her introductory comments, she mentions that all the intellect went to her siblings, if that's the case, her siblings must be off the charts. Deeanne's work is always so well researched, that I feel like I'm living in the moment with the characters. The smallest details are always there, and in such a way that it seems completely natural. Nothing hinders the plot.

Her latest book is just as thrilling. I love feeling the opulence of the Vanderbilt home and yet knowing just how that opulence affected those around them that served without thought of achieving a higher status than servant. The romance between Mack and Tillie is hot as well. Deeanne deserves another kudos for creating passion in a romance that sizzles without once crossing the boundaries of propriety. This one comes as highly recommended as all of her other novels. 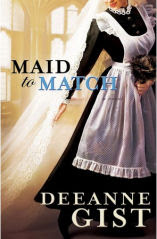 Falling in love could cost her everything.

From the day she arrived at the Biltmore, Tillie Reese is dazzled, by the riches of the Vanderbilts and by Mack Danvers, a mountain man turned footman. When Tillie is enlisted to help tame Mack's rugged behavior by tutoring him in proper servant etiquette, the resulting sparks threaten Tillie's efforts to be chosen as Edith Vanderbilt's lady's maid, After all, the one rule of the house is no romance below stairs.

But the stakes rise even higher when Mack and Tillie become entangles in a cover-up at the town orphanage. They could both lose their jobs, their aspirations...their hearts.

If you would like to read the first chapter of Maid to Match, go HERE. 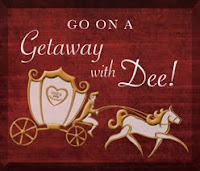 After a short career in elementary education, Deeanne Gist retired to raise her four children. Over the course of the next fifteen years, she ran a home accessory and antique business, became a member of the press, wrote freelance journalism for national publications such as People, Parents, Parenting, Family Fun, Houston Chronicle and Orlando Sentinel, and acted as CFO for her husband’s small engineering firm--all from the comforts of home.

Squeezed betwixt-and-between all this, she read romance novels by the truckload and even wrote a couple of her own. While those unpublished manuscripts rested on the shelf, she founded a publishing corporation for the purpose of developing, producing and marketing products that would reinforce family values, teach children responsibility and provide character building activities.

After a few short months of running her publishing company, Gist quickly discovered being a "corporate executive" was not where her gifts and talents lie. In answer to Gist’s fervent prayers, God sent a mainstream publisher to her door who licensed her parenting I Did It!® product line and committed to publish the next generation of her system, thus freeing Gist to return to her writing.

Eight months later, she sold A Bride Most Begrudging to Bethany House Publishers. Since that debut, her very original, very fun romances have rocketed up the bestseller lists and captured readers everywhere. Add to this two consecutive Christy Awards, two RITA nominations, rave reviews, and a growing loyal fan base, and you’ve got one recipe for success.

Her 2010 books, Beguiled and Maid To Match are now available for order.

Gist lives in Texas with her husband of twenty-seven years and their two border collies. They have four grown children. Visit her blog to find out the most up-to-the-minute news about Dee.
Posted by April Erwin at 6/21/2010