MY TAKE:
I agreed to review this book, because the premise intrigued me. I'm not overly familiar with Islamic beliefs or history and the chance to see a different world and set of beliefs through an experts eyes sounded interesting. It was too, in some ways. The book is amazingly detailed in history and description. It really is a step away from my known life. However, despite the great detail and history, I had trouble connecting with the main characters. I wanted to be swept away by romance and an exotic tale, but it just didn't happen for me. The writing style was a little stiff for my taste and the story just wasn't as compelling as I'd hoped.
However, I know my tastes are not always the same as others. You may find this to be right up your alley. The reviews on Amazon.com were pretty positive. Overall, I would I say I can only recommend it to those who have a strong love for this style and genre of book. I don't think it's a mainstream novel for all readers.
I do appreciate GRPR allowing me to participate in the tour. I enjoy new reading and new experiences. 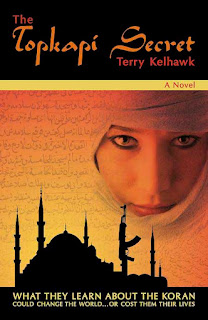 Mohammed Atareek is obsessed with getting to the codex. His research has convinced him the Koran has been changed many times, and this famous manuscript could help prove it. But the risks of getting a hold of it increase as other scholars start turning up dead.

After traumatic life circumstances Angela, a UC Berkeley English professor, makes a career move which puts her in the Middle East and across Mohammed’s path. His unique personality – overconfident, witty, and impulsive – is both puzzling and refreshing to Angela. But when Mohammed tries to engage her in his quest, he finds she has an agenda of her own. Between their cat and mouse games, heated discussions, and sparks of romance, the historical origin of the Koran unfolds. 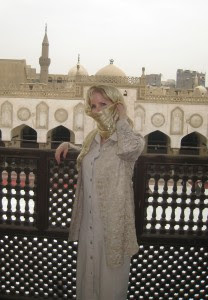 Terry Kelhawk is an award-wining speaker, writer, and teacher with significant personal and professional experience with Islam and the Middle East.

In Terry’s words, “I love peoples and cultures. We have so much to learn from each other, and this makes the world a richer place. Yet when I come across a misunderstanding or deception which adversely impacts a culture or people group, for the sake of those people I believe it should be exposed.”

Terry Kelhawk holds a doctorate degree, but believes people should keep on learning through life. Her areas of interest are culture, religion, and women’s rights – especially of Middle East. She blogs on huffingtonpost.com, foxnews.com, and politicalmavens.com, and likes travel, reading, and asking questions.

Terry believes we should, as Honey Jean of Atlanta in The Topkapi Secret would say, “Make the world a better place, or y’all just taking up space!”
Posted by April Erwin at 12/13/2010