Praying for Your Future Husband: Preparing Your Heart for His

Song Stuck on the Brain: Home by Marc Broussard

Praying For Your Future Husband:
Preparing Your Heart for His

I was 8 when Mom told me I should be praying for my future husband. I know, at 8 most kids aren't even thinking about falling in love, much less getting married. But I was a little different. I've wanted to fall in love, get married and have a solid relationship like my parents for as long as I can remember. At 8, I knew who I was going to marry. A boy I went to school and church with. I told Mom and rather than laugh, she said I should ask God if that's who He wanted me to marry. (It wasn't.)

It was something I hadn't thought of and yet made perfect sense.

Then she told me how she had almost married another man. Looking back she could see he was overbearing and controlling, life would have been very different for her. But a minister from church came to her and told her that God didn't want her to marry her fiance. It was a tough thing to hear. But after a lot of prayer she broke off the engagement. About a year later she met my dad.

I've been praying for my future husband ever since. I've kept a prayer journal with my thoughts for him. Who knows if he'll ever see it, but it's helped keep me on track. Now I have 3 young nieces that are growing faster than light and I've been sharing with them the same thoughts mom shared with me.

Tricia and Robin were truly inspired in writing this book, their openness in telling their own experiences make it unique and engaging. More importantly, they connect with young girls in an honest and straight forward manner. They lay out a plan for how to pray for "The One" as well as how to pray for yourself to grow and mature in the right ways too. Even as an adult, I found it meaningful to my own prayer life and encouraged me to see knew areas where both of us need prayer.

I'm excited to see a book that encourages girls to be God Lovers and to hold the men in their life up to that standard. This could revolutionize the meaning of real love and true commitment. Even better, it has the potential to revitalize the meaning of the marriage covenant for future couples. 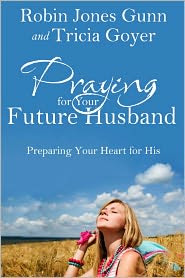 Have you ever thought about praying for your future husband?
Will it make a difference?
There's only one way to find out…

From when we were small girls, most of us dream of “The One,” our future husband. We think about what it would be like to be a bride. We wonder who that special guy is and when we'll find him. The great news is that what you do now can make a difference in your life and the life of your future husband!

Authors and good friends Robin Jones Gunn (Christy Miller series) and Tricia Goyer (author and former teen mom) believe God answers women's prayers for husbands—even husbands they may not meet for years. They invite young women to pray boldly for their future mate … while also asking God to prepare their own hearts.

In Praying for Your Future Husband, Robin and Tricia share their two vastly different experiences, including the things they did right and the mistakes they made on the path to meeting and marrying their husbands. Each chapter includes helpful Bible verses, prayers, and practical application, along with true stories of women who prayed for a husband and how God answered in remarkable ways.

God has a beautiful romance prepared for you. Prayer is the key to unlocking the love story … with your future husband and with God, the lover of your soul. 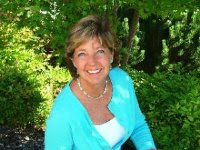 Robin Jones Gunn was born in Wisconsin and lived on a dairy farm until her family moved to southern California when she was five years old. She grew up in Orange County and spent her summers at Newport Beach with friends from her church youth group. After attending Biola University and Capernwray Bible School in Austria, Robin and Ross were married and spent the next two decades working together in youth ministry.

It was the young teens at Robin’s church who challenged her to write stories for them. She hadn’t thought much about being a writer, but took their request to heart and set her alarm for 3am, three days a week. With two small children it was the only time she could find to write the first story about Christy Miller. After two years and ten rejections the novel Summer Promise was accepted for publication in 1988. Robin hasn’t stopped writing since. Over 4 million copies of her 75 books have sold and can be found in a dozen translations all over the world.

Robin and her husband now live in Hawai’i where Ross is a counselor and Robin continues to write to the sound of tropical birds chattering in the palm trees outside her window. Their children are grown but manage to come to the islands with their families every chance they get. Robin's awards include: three Christy awards for excellence in fiction, a Gold Medallion finalist, Mt. Hermon Pacesetter and the Mt. Hermon Writer of the Year award. Robin travels extensively and is a frequent key-note speaker at various events around the world. She serves on the Board of Directors for Media Associates International and Jerry Jenkin’s Christian Writer’s Guild. 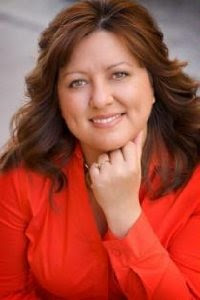 Tricia Goyer is the author of twenty-six books including Beside Still Waters, The Swiss Courier, and the mommy memoir, Blue Like Play Dough. She won Historical Novel of the Year in 2005 and 2006 from ACFW, and was honored with the Writer of the Year award from Mt. Hermon Writer's Conference in 2003. Tricia's book Life Interrupted was a finalist for the Gold Medallion in 2005. In addition to her novels, Tricia writes non-fiction books and magazine articles for publications like MomSense and Thriving Family. Tricia is a regular speaker at conventions and conferences, and has been a workshop presenter at the MOPS (Mothers of Preschoolers) International Conventions. She and her family make their home in Little Rock, Arkansas where they are part of the ministry of FamilyLife. Visit www.triciagoyer.com for more about Tricia and her books.

I received this book for free from WaterBrook Multnomah Publishing Group for this review.
Posted by April Erwin at 7/29/2011

Email ThisBlogThis!Share to TwitterShare to FacebookShare to Pinterest
Labels: Praying for your future husband preparing your heart for his, Robin Jones Gunn, Tricia Goyer, waterbrook