Angel Eyes is the first in a series of YA books, and so far they have intrigued me. Although the concept might not be new, I'm liking the cast and I'm curious to see where it goes. I know many have addressed the comparison to the Twilight series. Some reviewers claiming it's a Christianized version, others adamant it's nothing like Twilight at all.

As a fan of the Twilight series and having read the series multiple times, I will say the comparisons are vague. The initial opening set up of a teen girl moving to a small town in the northwest, the tone or style of the character's 'voice' in places. She's drawn to someone she senses could be dangerous. That's about it.

Then there is a whole separate book that stands on it's own. Personally, I don't have a problem with marketers trying to jump on the Twilight train and bill it as the next such series. It's a way to sell books in a tough market and I don't have a problem with Twilight. But that's a WHOLE other post. :) However, I haven't seen the marketers or publishing houses doing this, but other readers who see it and assume that it's just a Christianized version... As if that would be a bad thing anyway.

So cool your jets peeps, and take an honest look at this series as it's own creature. It can stand on it's own feet (or wings?) Twilight fan or not, forget about preconceived notions and all the hullabaloo swirling around the Internet. Check it out and then let me know what you think...

Intriguing new YA series or not? 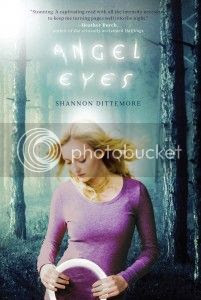 Once you’ve seen, you can’t unsee. Everything changes when you’ve looked at the world through . . .

Brielle went to the city to chase her dreams and found tragedy instead. She’s come home to shabby little Stratus, Oregon, to live with her grief and her guilt . . . and the incredible, numbing cold she can’t seem to shake. Jake’s the new guy at school. The boy next door with burning hands and an unbelievable gift that targets him for corruption. Something more than fate has brought them together. An evil bigger than both of them lurks in the shadows nearby, hiding in plain sight. Two angels stand guard, unsure what’s going to happen. And a beauty brighter than Jake or Brielle has ever seen is calling them to join the battle in a realm where all human choices start. A realm that only angels and demons—and Brielle—can perceive.

Shannon Dittemore has an overactive imagination and a passion for truth. Her lifelong journey to combine the two is responsible for a stint at Portland Bible College, performances with local theater companies, and a focus on youth and young adult ministry. The daughter of one preacher and the wife of another, she spends her days imagining things unseen and chasing her two children around their home in Northern California. Angel Eyes is her first novel.

Visit the other Tour Members:

In conjunction with the CSFF Blog Tour, I received a free copy of this book from the publisher.

I agree; there are some Twilight similarities, but the book stands on its own. Thanks for sharing your thoughts!