Song Stuck on the Brain: Overjoyed by Matchbox Twenty

Twice a Bride is book 4 in The Sinclair Sisters of Cripple Creek Series. All of which have been very enjoyable. Willow is actually the sister-in-law to the Sinclair sisters, but has been welcomed into the family with open arms, especially now that she is returned from being institutionalized for depression after her first husband died in a tragic accident. Everyone treats Willow as if she's fragile, afraid she can't stand on her own and make a new life for herself, but Willow is determined to prove them wrong. To show them the faith she has learned to depend on and to prove to herself that she can move forward and be happy. She never anticipated that love or marriage would be a part of her life again.

Trenton Van Der Veer isn't your average romance hero. He has a speech impediment that has left him with all kinds of scars in his life, spiritually and emotionally. He's had his heart broken and abused by a selfish young girl. The last thing he wants is a wife. He hires Willow under mistaken impression she's married. When he discovers she's a widow, he realizes he's relieved. Willow is talented, they seem to fit like two pieces of a puzzle, but can they overcome their past to find a happy future?

Willow and Trenton are both and inspiration, their frailty becomes their strength as they grow in faith and it's so encouraging. The surrounding stories with the sisters, and the family dynamics keep things light hearted and rolling along at a fast pace. Romance blooms between more than just the Willow and Trenton as well, so you get more sweetness for your buck.

A great read over all. I do recommend you read the earlier books first. They're great and it makes the read smoother, but Twice a Bride can be read as an individual novel if you chose to be a rebel. :)

Full of resolve, young widow Willow Peterson decides to pursue her dreams to be an artist as she settles into a new life in the growing mountain town of Cripple Creek. When she lands a job working as a portrait painter with handsome entrepreneur and photographer Trenton Van Der Veer, the road before Willow seems to be taking a better-than-anticipated turn.

With questions tugging at several hearts in town, including the Sinclair Sisters’ beloved Miss Hattie, change is traveling down the tracks as several unexpected visitors make their way out West. Will the new arrivals threaten the deep family bonds of the Sinclair sisters and the roots of love that are just taking hold for Willow?

Filled with the resonating questions that all women face, this romance awakens hope against grief, love against loss, and dreams against life’s unexpected turns.

Read a Sneak Peak of Twice a Bride HERE. 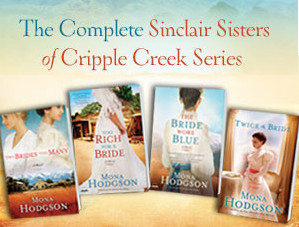 Over the last twenty-five years, Mona Hodgson’s publishing credits have grown to include nearly thirty children's books, contributions to more than ten books for adults, and four historical novels, including her debut, Two Brides Too Many in The Sinclair Sisters of Cripple Creek Series. Mona is a popular speaker for women's groups, schools, and educators’ and writers’ conferences. She lives in Arizona with her husband and has two daughters and several grandchildren.

"I received this book for free from WaterBrook Multnomah Publishing Group for this review."
Posted by April Erwin at 2/03/2013