A Corner of White: The Colors of Madeleine by Jaclyn Moriarty

A Corner of White: The Colors of Madeleine Book One
by
Jaclyn Moriarty
MY TAKE:
Jaclyn Moriarty is a new writer for me. I was perusing Netgalley's selections and A Corner of White caught my eye. It sounded fun, intriguing, why not give it a go? After starting the book, I wondered if I had made a wise choice. In all honesty, if I hadn't promised a review, I might not have finished the book. I'm glad I did though, because it grew on me.

What bothered me the most in the beginning was the jumping back and forth between stories without any connection as to what each had to do with the other. It was like reading two very different books with two different main characters and someone decided to jumble the chapters together. Where Madeleine was a home schooling British girl with an odd family and circle of friends; Elliot's story felt more like something out of a Piers Anthony fantasy book. (I love Pier Anthony, by the way.) It took quite a while for the two worlds to meet. When Madeleine finds the 'crack' between the worlds, I wanted to cheer that we were finally making progress.

Elliot and Madeleine communicate back and forth about their lives, giving advice and learning about one another, but it wasn't until well past half-way that I begin to see how their stories DID connect. Mirroring each other in a way. It's because of their communications that they each find the answers they need. Of course their connection opens a bigger plot, one that will require them to work together to save the Kingdom of Cello. Nice jumping off point for book two.

Genre-busting is a pretty good description for this series. I love fantasy, and never mind if it's Middle Grade or Young Adult as long as it's well written. This one took patience, but it was worth the effort. It will be interesting to see where the series goes from here.

Note: This is a mainstream fiction book, not CBA market. For those that would want to be aware of it, some things are touched on lightly, such as alcoholism and homosexuality. There are no sexual references, other than about a persons orientation. For example, the poet Lord Byron and his life is discussed quite a bit, including his relationship with his half-sister and his possible attraction to men. This was part of the home schooling lessons in Madeleine's story. 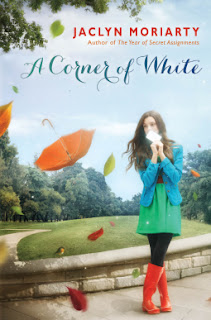 The first in a rousing, funny, genre-busting trilogy from bestseller Jaclyn Moriarty!
This is a tale of missing persons. Madeleine and her mother have run away from their former life, under mysterious circumstances, and settled in a rainy corner of Cambridge (in our world).

Elliot, on the other hand, is in search of his father, who disappeared on the night his uncle was found dead. The talk in the town of Bonfire (in the Kingdom of Cello) is that Elliot's dad may have killed his brother and run away with the Physics teacher. But Elliot refuses to believe it. And he is determined to find both his dad and the truth.

As Madeleine and Elliot move closer to unraveling their mysteries, they begin to exchange messages across worlds -- through an accidental gap that hasn't appeared in centuries. But even greater mysteries are unfolding on both sides of the gap: dangerous weather phenomena called "color storms;" a strange fascination with Isaac Newton; the myth of the "Butterfly Child," whose appearance could end the droughts of Cello; and some unexpected kisses...

JACLYN MORIARTY grew up in Sydney, Australia, with four sisters, one brother, two dogs, and twelve chickens. She studied law at the University of Sydney, Yale, and Cambridge, and worked as an entertainment lawyer before she wrote the Ashbury High novels, including THE YEAR OF SECRET ASSIGNMENTS, THE MURDER OF BINDY MACKENZIE, and THE GHOSTS OF ASHBURY HIGH. She still lives in Sydney, with her little boy, Charlie.

You can also visit Jaclyn on Facebook or read her Blog.﻿
Posted by April Erwin at 4/15/2013

Email ThisBlogThis!Share to TwitterShare to FacebookShare to Pinterest
Labels: a corner of white, jaclyn moriarty, Netgalley, the colors of madeleine