I'm a big fan of Merlin/King Arthur tales and there are a lot of them out there. Some better than others and each presenting Merlin in a completely different lights. Some as a druid, some as a magician or mystic, some as a bard. His age and beliefs vary as often as his part in the tale. I think in a lot of ways that's what makes his stories so intriguing. His story, fable or not, has made a deep impression on us and even after all of these years we're still trying to make sense of his role. Or, maybe because he is such a vivid figure, he makes a good allegorical character. A man that can both represent the common man and his challenge to overcome life's evils, and represent the hero/wise one that guides others to safety.

Robert Treskillard has started his trilogy with a truly unique look at Merlin. He's young and partially blinded, scarred from an attack and still carries those emotional wounds. He's not the hero yet we know and love. He's also a Christian. One of few in his community. Because of the druid's enchanting stone, his community is falling to evil and he must find the courage to stand up and fight for Jesu. That's hard for a young man who has a hard time even telling the girl he cares for how he feels.

It's inspiring and full of action and intensity. Merlin's faith is strong, but it's put to the test over and over. It's a journey that will lead him places he never imagined. I loved the story, the fresh take on Merlin's life as a young man. I highly recommend it to all ages and I can't wait for the next book. 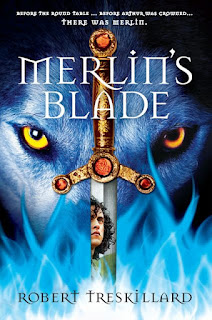 A Strange Meteorite
A meteorite crashes near a small village in Britain and brings a mysterious black stone. Two worlds collide—Druids and Christians—and the stone is at the center of the conflict.

A Sinister Enchantment
Its lurid flames tempt and ensnare everyone who see it. Only Merlin, the eighteen-year-old son of a swordsmith who is mostly-blind, is immune. Soon his family, his village and all of Britain will be under the control of the druids who seek to use the power of the stone for their own purposes.

And Only Merlin Can Destroy It
Merlin must face his fear, his disfigurement, and his blindness to take hold of the role ordained for him. But when he is surrounded by adversaries, with hope nearly lost, how will he save the girl he cherishes and rid Britain of this deadly evil … without losing his life?

The Author is holding a Contest! You could win your own Excalibur made by the author himself! There are other prizes available as well, be sure to visit his contest page for more details on how to enter. 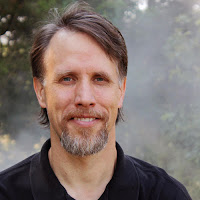 Robert Treskillard is a Celtic enthusiast who holds a B.A. in Biblical & Theological Studies from Bethel University, Minnesota. He has been crafting stories from his early youth, is a software developer, graphic artist, and sometime bladesmith. He and his wife have three children and are still homeschooling their youngest. They live in the country outside St. Louis, Missouri.

Read more about the author at his website or visit his blog at http://www.epictales.org/blog/robertblog.php


In conjunction with the CSFF Blog Tour, I received a free copy of this book from the publisher.
Posted by April Erwin at 5/28/2013

So glad you liked the book, April. Very nice review!

Thanks, Becky. I was really left wanting more, can't wait to see the next book. :)