Song Stuck on the Brain: Rolling in the Deep by Adele﻿
Firefly Island
The Shores of Moses Lake Book #3
by
Lisa Wingate﻿

Moses Lake is both the most idyllic place to live and also one of hardest - depending on which part of town you live in. It's one of the things I really like about this series. The town is as much a character, alive and breathing, as the main hero/heroine. It has it's small town charms and neighborly qualities that make me think of Mayberry and that alone makes the stories enjoyable. It's a place to escape and enjoy a quirkiness that is unlike my own hometown.

Lisa takes it beyond that and opens our eyes to those rougher areas. The dirt poor in the mountain area that have such poor roads the kids can't make it to school regularly. Illiteracy and low education are rampant along with alcohol and drug use. Drug dealers infest it because they like the seclusion and difficult access. But her characters are the type to fight for change and improvement, to make life better for those who can't help themselves. Each book has carried that fight for right. I love those subplots and angles woven throughout. It's a message of empowerment and faith, overcoming what life deals you, and most of all compassion.

Those are things Mallory Hale really needs in this novel. And endurance. She REALLY needs endurance. Let me say, Daniel and Nick are wonderful, I fell in love with them too, but it took a big leap of faith to follow Daniel to Texas, and the home she finds is in desperate need of a make over. I don't like spoilers, so I'll just say if I'd found what she found, I would have been in town at the local bed and breakfast. No matter how much I loved my new husband! *shudder*

In a lot of ways this felt like a story of someone finding their identity. When life throws big changes our way, even amazing ones, it can throw us off balance. Make us reconsider who we are and just what it is that makes us important or gives us purpose. Mallory has to find the answer to that while also learning to be an instant mom and wife, deal with a move all the way across the country, and solve the murder mystery surrounding her husband's new boss.

Very compelling, fast paced and fun. Lisa Wingate is a fantastic writer and Firefly Island is one more hit on her list.

Check out the first two books in the series and my reviews: 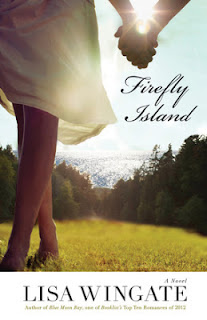 At thirty-four, congressional staffer Mallory Hale is about to embark on an adventure completely off the map. After a whirlwind romance, she is hopelessly in love with two men--fortunately, they're related. Daniel Everson and his little boy, Nick, are a package deal, and Mallory suddenly can't imagine her future without them.

Mallory couldn't be more shocked when Daniel asks her to marry him, move to Texas, and form a family with him and motherless Nick. The idea is both thrilling and terrifying.

Mallory takes a leap of faith and begins a sweet, mishap-filled journey into ranch living, Moses Lake society, and a marriage that at times reminds her of the mail-order-bride stories. But despite the wild adventure of her new life, she discovers secrets and questions beneath her rosy new life. Can she find answers on Firefly Island, a little chunk of property just off the lakeshore, where mysterious lights glisten at night?

INTERVIEW WITH THE AUTHOR:
1. Tell us a little bit about Moses Lake and West Ranch, and why you chose this as the setting for your novel.

While the town of Moses Lake in the novel is fictional, it is based on a little lakeside community in Central Texas. The area is beautiful and filled with enduring legends about towns, vehicles, and Native American graveyards hidden beneath the water. It is also home to a wide range of residents, ranging from low-income families living on hardscrabble pieces of land in the hills, to tourists visiting upscale waterside resorts, to wealthy vacationers, to nearby Mennonite communities, to ranchers whose ranches border the lake, like the West Ranch in the story. Central Texas is still remote enough that some landowners maintain vast tracts of land. Jack West’s ten thousand acre ranch in the story is large, but not out of line for the region.

Despite the differences among the residents of the lake area, communities are generally friendly and close-knit. When you’re isolated and living miles from town—like Mallory in the story— you have no choice but to get to know your neighbors.
2. Parts of Firefly Island are based on real experience. Can you share a bit about that?

Mallory’s life takes a sudden right turn when her love-at-first-sight flame, Daniel Everson, is offered a job on a remote ranch in faraway Texas. Some years ago, my life took a similar turn when, through a series of family connections, my husband was offered the chance to leave his corporate job and operate a ten thousand acre ranch in the Texas Hill Country.

That was the beginning of wild adventure that would last several years. We knew we’d never get the chance to do something like this again, so we sold our home and went for it. We were scared to death. We had a three-and-a-half-year-old son at the time (the age of Daniel’s son, Nick, in the story). Like Mallory, we worried about what the schools would be like that far out in the country, how we would find playmates for our son, and whether he would be lonely, living miles from other families. It never occurred to me to wonder whether I would be lonely. I figured that part out after we started our new life!
3. Ranch life and modern-day cowboys are often inaccurately represented in fiction. Can you share a few of the common cowboy myths and the reality of modern cowboy life, based on your experiences?

In general, cowboys are just more likely to be found riding a tractor or a truck than riding a horse. When the day does call for horseback work, such as moving cattle from one location to another, or sorting off calves at weaning time, it’s often an event that hired hands and families look forward to, and family members frequently come out to participate. Cowboys seldom ride stallions while doing horseback work—that’s a common misnomer in fiction. Stallions tend to be difficult to handle in a working situation, and cowboys can’t risk distractions when there’s a job to be done. Ranch work is long, difficult, and sometimes dangerous.


4. Mallory’s story has been likened to a "modern-day mail-order bride tale." Do you think this fits? In what way?

Mallory experiences the life of a mail-order bride in many ways. Because she and Daniel have only known each other a short time when the job move forces a huge leap of faith in their relationship, she finds herself married to a man she adores, but barely knows. Like any newly-married couple, they have much to learn about each other, but Mallory is also facing the sudden step-parenthood of three-year-old Nick, and the trials of leaving behind her family, her career, her friends, her identity, and all that is familiar. The challenges of life on a ranch are completely foreign to her.

In days of old, mail-order brides faced many of the same challenges. Our great-great grandmothers attempted to solve the problem by writing letters home, joining in sewing circles and ladies’ societies in their new locations, and sometimes by documenting their experiences in journals. Mallory finds herself unwillingly drawn into the tradition of journaling, but in a much more modern way, when she stumbles into the blogging life. As the blog draws fans, she becomes The Frontier Woman, and her world expands in ways she could never have dreamed.

5. Firefly Island delves into some particularly timely issues, including a political scandal. Where did you get the idea for the events that eventually threaten Mallory’s marriage and her new life?
Stories are stitched together in so many ways. With every story I write, the end result is equal parts pre-plotting and serendipity. The political scandal in
Firefly Island was largely a product of serendipity and timing. As I was writing the book, a local controversy was brewing in Central Texas. I learned about it when I happened to attend an event in my hometown and sat next to someone who’d been fighting a David-and-Goliath-style battle against political powerbrokers. While the events in the story were only partially inspired by the ugly reality brewing, that little nugget of local intrigue generated the perfect challenge to Mallory’s newfound life–a battle that she, with her experience in national politics, is uniquely suited to fight.

6. What do you hope readers take away from their journey to Firefly Island?
At its heart, even with the larger issues of political scandal and local challenges, Firefly Island is a story about families, friendships, about community—how it develops and why we need it. Human beings are, at the most basic level, communal creatures. There’s so much evidence that people are happier and healthier, that we’re more generous and open with one another, that families are stronger and children achieve more when strong ties of friendship and community are there. These days, technology, busy schedules, and an on-the-go lifestyle compete with relationship-building activities, chipping away at the very thing we need the most. So often our society tells people that success is in not having to rely on anyone, but we were created to give and take, to need each other. I hope that
Firefly Island provides a challenge to all of us, to see what we can contribute and what we can gain from the people we cross paths with in our neighborhoods and communities.

Lisa Wingate is a popular inspirational speaker, magazine columnist, and national bestselling author of several books, including Tending Roses, Talk of the Town, Blue Moon Bay, and Larkspur Cove, which won the 2011 Carol Award for Women's Fiction. Lisa and her family live in central Texas. Visit www.lisawingate.com
Posted by April Erwin at 5/10/2013

bolavita said...
This comment has been removed by a blog administrator.
Sunday, February 11, 2018