Song Stuck on the Brain: Roar by Katy Perry


Today, on behalf of the CSFF, I'm touring:

Book 4 is here and the quest is nearly done, just one more book after this... I love me some Stephen Lawhead, so I'm both thrilled and a little sad.

Stephen Lawhead's writing is phenomenal and his Bright Empire series might just be the most complex and advanced of any of his work. It's a mixture of suspense, science, history and faith with a heavy dose of What if?

The plot is definitely complex with a heavy rotating cast of lead characters, but don't let that scare you off. Just be sure you start with the first book in the series. After that, I doubt you'll be able to put them down. The quantum physics and theories presented are intriguing, and whether I agree with the theories or not they are a blast to read about.

There were moments when there were enough different story lines going at once, that I began to wonder where it was going, but that is common with a series when it's the next to last book. It's setting up the big finish. It didn't make the book any less interesting. I'm very excited to know that the final story will be coming soon. So be sure to read up on the series and get ready for quests final answers.


To read more about the series, check out my previous reviews for the first three books: The Skin Map, The Bone House, The Spirit Well. 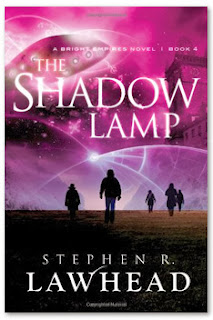 The quest for answers—and ultimate survival—hinges on finding the cosmic link between the Skin Map, the Shadow Lamp, and the Spirit Well.
The search for the map of blue symbols began in a rainy alley in London but has since expanded through space and time and includes more seekers.
Kit, Mina, Gianni, Cass, Haven, and Giles have gathered in Mina’s 16th-century coffee house and are united in their determination to find a path back to the Spirit Well. Yet, with their shadow lamps destroyed and key pieces of the map still missing, the journey will be far more difficult than they imagine. And when one of their own disappears with Sir Henry’s cryptic Green Book, they no longer know who to trust.
At the same time, the Zetetic Society has uncovered a terrifying secret which, if proven, will rock the very foundations of Creation. The quest for answers is no longer limited to recovering an unknown treasure. The fate of the universe depends on unraveling the riddle of the Skin Map. 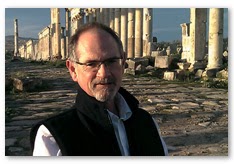 His middle name is ‘Ray’.


In conjunction with the CSFF Blog Tour, I received a free copy of this book from the publisher. ﻿
Posted by April Erwin at 11/13/2013

I join you in looking forward to the last book with excitement and sadness. I've become accustomed to reading one of these every year now. It's going to be interesting to see all these stories come together.

Agreed, Jeff! The story is so vast and there are so many things to tie up, and yet I don't feel like Lawhead has let anything slip. The culmination will be huge! Then I'll have to go back to waiting impatiently for his next great work. :)