Song Stuck on the Brain: Princes and Frogs by Superchick


Welcome back to #NationalPrincessWeek! A week for us to celebrate the little girl (or not so little girl) in all of us that at some point dreamed of being royalty and finding her Prince Charming.

I want to be a princess with super powers. Doesn’t that sound cool? A princess who could run faster than a train or who could be invisible and hide from the aunt that pinches my cheeks too hard; or even better, one who could turn vegetables to candy. I’d always eat my Brussels sprouts then. Hyacinth can’t turn things into candy, but she does have a cool ability. She floats! 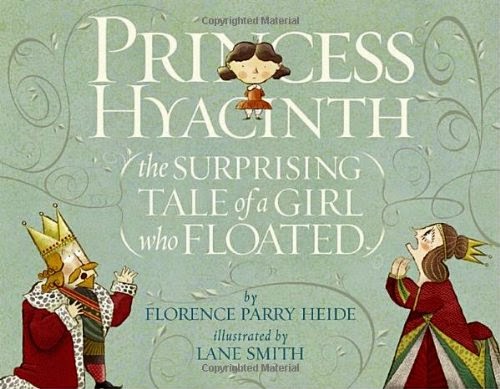 “Princess Hyacinth has a problem: she floats. And so the king and queen have pebbles sewn into the tops of her socks, and force her to wear a crown encrusted with the heaviest jewels in the kingdom to keep her earthbound. But one day, Hyacinth comes across a balloon man and decides to take off all her princess clothes, grab a balloon, and float free. Hooray! Alas, when the balloon man lets go of the string . . . off she goes. Luckily, there is a kite and a boy named Boy to save her.”

As long as we’re in a SciFi mode from yesterday, I want to mention another fun series I’ve discovered that combines the best of several genres. Re-imagined fairy tales set in a dystopian, futuristic setting - Cinderella as a Cyborg? NO WAY! I thought for sure it wouldn’t work. But it does, really well. The whole series does, I promise. So be prepared to try something truly unique and be impressed. Check out the Lunar Chronicles by Marissa Meyer.

Humans and androids crowd the raucous streets of New Beijing. A deadly plague ravages the population. From space, a ruthless lunar people watch, waiting to make their move. No one knows that Earth’s fate hinges on one girl. . . .

Cinder, a gifted mechanic, is a cyborg. She’s a second-class citizen with a mysterious past, reviled by her stepmother and blamed for her stepsister’s illness. But when her life becomes intertwined with the handsome Prince Kai’s, she suddenly finds herself at the center of an intergalactic struggle, and a forbidden attraction. Caught between duty and freedom, loyalty and betrayal, she must uncover secrets about her past in order to protect her world’s future.

Cinder is back and trying to break out of prison—even though she’ll be the Commonwealth’s most wanted fugitive if she does—in this second installment from Marissa Meyer.


Halfway around the world, Scarlet Benoit’s grandmother is missing. It turns out there are many things Scarlet doesn't know about her grandmother, or the grave danger she has lived in her whole life. When Scarlet encounters Wolf, a street fighter who may have information as to her grandmother's whereabouts, she is loath to trust this stranger, but is inexplicably drawn to him, and he to her. As Scarlet and Wolf unravel one mystery, they encounter another when they meet Cinder. Now, all of them must stay one step ahead of the vicious Lunar Queen Levana.

In this third book in Marissa Meyer's bestselling Lunar Chronicles series, Cinder and Captain Thorne are fugitives on the run, now with Scarlet and Wolf in tow. Together, they’re plotting to overthrow Queen Levana and prevent her army from invading Earth.
Their best hope lies with Cress, a girl trapped on a satellite since childhood who’s only ever had her netscreens as company. All that screen time has made Cress an excellent hacker. Unfortunately, she’s being forced to work for Queen Levana, and she’s just received orders to track down Cinder and her handsome accomplice.

When a daring rescue of Cress goes awry, the group is splintered. Cress finally has her freedom, but it comes at a higher price than she’d ever expected. Meanwhile, Queen Levana will let nothing prevent her marriage to Emperor Kai, especially the cyborg mechanic. Cress, Scarlet, and Cinder may not have signed up to save the world, but they may be the only hope the world has.


I want to welcome Alexa, Kianna’s housemate and best friend. They met as roomies in college and have been tight ever since. Alexa is a party planner and loves to cook. What do you have for us, Alexa?
I have wonderful plans for all of you. National Princess Week just begs for a party, doesn’t it? How about an International Tea Party?
I think it sounds like a lot of fun too. With my ideas here and on my Pinterest page, you can whip something together in time to host it this weekend and see the holiday out with a bang!
(Follow April's board National Princess Week International Tea Party on Pinterest. )


There are so many directions you could go with food, decorations, even entertainment – it’s all about who your guests are and what you have time to create. There’s a wide variety of options on the Pinterest page, but pick and choose what you like best. :)
I had to share a couple of recipes with you here, because I’m just that kind of girl. I love trying new recipes. When I saw Giada’s recipe on FoodNetwork.com, I knew it would be perfect. I’m teasing the title just a bit. (Hope you don’t mind, Giada.)


“Princess and the Pea” Pesto Crostini

For the pea pesto: Pulse together the peas, garlic, Parmesan, 1 teaspoon of salt and 1/4 teaspoon of pepper in a food processor. With the machine running, slowly add the olive oil until well combined, about 1 to 2 minutes. Season with additional salt and pepper, if needed. Transfer to a small bowl and set aside.

For the crostini: Preheat a stovetop griddle or grill pan on medium-high heat. Brush both sides of the sliced bread with olive oil and grill until golden, about 1 to 2 minutes. Transfer the bread to a clean surface and spread 1 to 2 tablespoons of the prepared pesto on each slice.

Top with tomato halves and serve.

*Cook's note: If you don't have day-old bread on hand, you can dry out fresh bread by putting the slices in a preheated 300 degree F oven until slightly crisp, about 5 minutes.

And because I always like a little sweet with my savory, try these little yummies.


Easy, follow the steps in the picture and try not to eat them all before the party!


Now for the drink, tea is expected and for a fun flair I recommend Jasmine tea. Divine flavor and fits the princess theme. But for those who just don’t enjoy tea, it’s nice to offer an alternative. How about something cold? Like...

There are so many ways you can decorate. Want high tea with a lot of class? Think flowers and pretty lacy table decorations. If it’s for a younger crowd, go for a more sparkly fairy tale feel with costumes and wands and tiaras for everyone. There are so many ways to have a great time at this party. Be sure to share your ideas with us in the comments below. I’d love to know what you plan for your party.


Only 3 more days to go and there is still a lot more to come! If you haven’t stopped by my Facebook page yet, be sure to check out the spotlight on Modern Day Princesses around the world. Being a princess is more than wearing pretty jewelry, now they have big aspirations. These girls are well educated and have careers of all kinds that benefit their community. Do you have a favorite princess? Tell me about it in the comments below!


And don’t forget to Enter to Win!

a Rafflecopter giveaway
Finding true love these days feels impossible to Kianna Ravencamp, only dysfunction surrounds her. Her sister’s married to an abusive husband and marriages she’s admired for years are falling apart. Maybe relationships like her parent’s don’t exist anymore. She dreams of true love and a family, but she’s never even been kissed.

For her birthday, her best friend gives her a journal and dares her to follow her dream of songwriting and vocal lessons quickly follow. Kianna’s finally dared to dream big… if the three men in her life don’t get in her way.
Nick Steele, her new vocal partner is flirtatious and charming. Derek Simpson, the new vocal coach is asking her out for coffee. Even Jason Payne, a childhood friend is acting odd. For the first time in her life, she will have to navigate dating and flirtation. Will her inexperience be her downfall? How will these relationships affect her songwriting career? Letting go and trusting God is the only answer that brings the path to real love and success.
Buy your copy today at Amazon, Barnes and Noble, Smashwords and more. Click the Buy My Book tab for a list of direct links.
Posted by April Erwin at 4/23/2014