Song Stuck on the Brain: I Wanna Be Like You from The Jungle Book

As much as I was looking forward to this book, it never arrived. *pout* The publishers must have had something come up to delay the delivery. I'm sorry, I know this is two in a row, but we all know there is no controlling the mail delivery. If the book ever arrives, I will post a review. In the mean while, please enjoy a peek at the book to come. 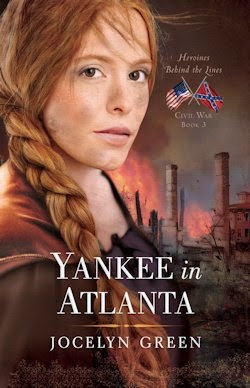 When soldier Caitlin McKae woke up in Atlanta after being wounded in battle, the Georgian doctor who treated her believed Caitlin's only secret was that she had been fighting for the Confederacy disguised as a man. In order to avoid arrest or worse, Caitlin hides her true identity and makes a new life for herself in Atlanta. Trained as a teacher, she accepts a job as a governess to the daughter of Noah Becker, a German immigrant lawyer, who is about to enlist with the Rebel army. Then in the spring of 1864, Sherman's troops edge closer to Atlanta. Caitlin tries to escape north with the girl, but is arrested on charges of being a spy. Will honor dictate that Caitlin follow the rules, or love demand that she break them?

If you would like to read the first chapter of Yankee in Atlanta, go HERE.

Jocelyn Green is a child of God, wife and mom living in Cedar Falls, Iowa. She is also an award-winning journalist, author, editor and blogger. Though she has written nonfiction on a variety of topics, her name is most widely recognized for her ministry to military wives: Faith Deployed. Her passion for the military family was fueled by her own experience as a military wife, and by the dozens of interviews she has conducted with members of the military for her articles and books, Faith Deployed: Daily Encouragement for Military Wives and its sequel, Faith Deployed...Again: More Daily Encouragement for Military Wives. She is also co-author of both Stories of Faith and Courage from the War in Iraq & Afghanistan and Stories of Faith and Courage from the Home Front (forthcoming, May 2012). Her Faith Deployed Web site and Facebook page continue to provide ongoing support, encouragement and resources for military wives worldwide.
Posted by April Erwin at 6/20/2014

Email ThisBlogThis!Share to TwitterShare to FacebookShare to Pinterest
Labels: CFBA, I Wanna Be Like You, Jocelyn Green, The Jungle Book, Video, Yankee in Atlanta