It is October 1st, time for the FIRST Day Blog Tour! (Join our alliance! Click the button!) The FIRST day of every month we will feature an author and their latest book's FIRST chapter! 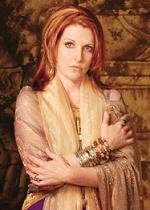 Guess what? The publicists for Ginger have agreed to a book contest for Dark Hour! Read this first chapter and leave a comment. Your name will be added to a drawing to win a free book!

Ginger Garrett is an acclaimed novelist and expert in ancient women's history.

Her first novel, Chosen, was recognized as one of the best five novels of the year by the Christian publishing industry. Ginger enjoys a diverse reader base and creates conversation between cultures.

In addition to her 2006 and 2007 novels about the most evil women in biblical history, she will release Beauty Secrets of the Bible (published by Thomas Nelson) in Summer 2007.

Ginger Garrett's Dark Hour delves into the biblical account of Jezebel's daughter and her attempt to end the line of David.

And now, a special Q&A with Ginger Garrett:

I was praying about what book to write after Chosen, and accidentally left my open Bible on the kitchen table. (A dangerous thing, since in my house, small children and large dogs routinely scavenge with dirty hands and noses for snacks!) As I walked past it, I saw a caption about someone named Athaliah and a mass murder. I stopped cold. I knew it was my story.

Athaliah was the daughter of Jezebel--a real woman in history--who tried to destroy all the descendents of King David in a massacre. God made a promise that a descendent of King David would always sit on the throne, and one day a Messiah would come from this line. If Athaliah succeeded, she would break the promise between God and the people, and destroy all hope for a Messiah.

One woman, her step-daughter, Jehoshebeth, defied her. She stole a baby during the massacre and hid him. Between them, the two women literally fought for the fate of the world.

2.) What drew you to write biblical fiction?

The similarities between the lives of ancient women and our lives. We get distracted by their "packaging," the way they dressed and lived, but at heart, our stories are parallel.

Equal amounts, and I don't stop researching while I write. I have a historical expert, probably the best in the world in his field, review the manuscript and point out errors. The tough part is deciding when to ignore his advice. He pointed out that most everyone rode donkeys if they weren't in the military, but a key scene in the novel involves riding a horse to the rescue. It would have been anti-climatic to charge in on a donkey! :) So I ignored his advice on that one.

4.) Dark Hour takes its reader deep into the heart of palace intrigue and betrayals. Were parts of this book difficult to write?

I left out much of the darkest material I uncovered in research. It was important to show how violent and treacherous these times and this woman (Athaliah) could be, but I tried to be cautious about how to do it. The story was so powerful and hopeful--how one woman's courage in the face of evil saved the world--but the evil was depressing. I tried to move quickly past it. I wanted balance. Our heroine suffers and some wounds are not completely healed in her lifetime. That's true for us, too.

5.) What would modern readers find surprising about ancient women?

They had a powerful sense of the community of women. They also wore make-up: blush, glitter eyeshadow, lipstick, powder, and perfume! They drank beer with straws, and enjoyed "Fritos": ground grains, fried and salted. Many of our foods are the same today, but they loved to serve pate made from dried locusts, finely ground. Ugh! 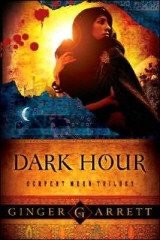 Without further ado...here is the FIRST chapter of Dark Hour by Ginger Garrett. Judge for yourself if you'd like to read more!

(There is a prologue before chapter one regarding the birth of Jehoshebeth... Athaliah is not Jehoshebeth's biological mother.)

I hope you've all enjoyed reading the first chapter of Dark Hour. I'm so excited to be able to offer this contest for a free book!

Thanks and good luck!

Too bad they didn't have Swiffer back then!
Thanks for hosting me today!
Visit me at www. gingergarrett. com
or http:// gingergarrett.blogspot.com