CFBA: The Big Picture by Jenny B. Jones

Song Stuck on the Brain: Huey's Been Working On the Railroad.... We have an elderly coworker that showed up today in pinstriped overalls and a matching cap. I kept expecting to hear, "All Aboard!" I sang to him instead. 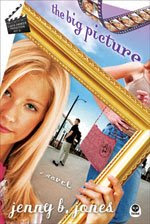 Sometimes there’s a fine line between comedy and tragedy—and Katie Parker is walking it.

School is winding down for the summer but Katie Parker is having a bad day. After leaving the drive-in, where her imploding love life was the main attraction, Katie arrives home to a big surprise on the Scott's front porch.

Her mother, Bobbie Ann Parker, a former convict and recovering addict, wants to take Katie away from her family, friends, and church. Now Katie's life will be changed by a series of dramatic choices as she struggles to understand what family and home really means.

Katie is forced to walk away from In Between, leaving behind a family who loves her, a town drive-in to save, and a boyfriend who suddenly can’t take his eyes off his ex. When the life her mother promised begins to sink faster than one of Maxine’s stuffed bras, Katie knows she needs to rely on God to keep it together.

But where is he in all this? Can Katie survive a chaotic life with her mother—and one without the Scotts? And if God is there, will he come through before it’s too late?

A Katie Parker Production series offers teen girls real-world fiction balanced by hope and humor. The The Big Picture helps us realize that the difficult chapters in our journey are only part of God's big story for our lives.

You can read the first chapter HERE

"A heroine to love. Jones just gets better with every book, and The Big Picture is her best one yet."
~BARBARA WARREN, author of The Gathering Storm

"Such inspiration in a package of fun and faith!"
~EVA MARIE EVERSON, author of the Potluck Club series

Jenny B. Jones is the author of A Katie Parker Production series. The other books in the series are In Between and On The Loose. Though now an adult, she still relates to the trauma and drama of teen life. She is thrilled to see her writing dreams come true, as her previous claim to fame was singing the Star Spangled Banner at a mule-jumping championship. (The mules were greatly inspired.)

Jenny resides in Arkansas, where, as a teacher, she hangs out with teens on a regular basis.
Posted by April Erwin at 5/01/2008