Song Stuck on the Brain: Ball of Confusion from Sister Act Soundtrack 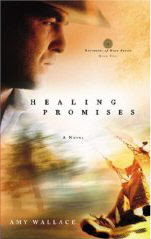 When FBI Agent Clint Rollins takes a bullet during a standoff, it might just save his life. But not even the ugly things he’s seen during his years working in the Crimes Against Children Unit could prepare him for the overwhelming powerlessness of hospital tests revealing an unexpected diagnosis. If only Sara weren’t retreating into doctor mode…he needs his wife now more than ever.

Sara Rollins is an oncologist with a mission–beating cancer when she can, easing her patients’ suffering at the very least. Now the life of her tall Texan husband is at stake. She never let the odds steal her hope before, but in this case, the question of God’s healing promises is personal. Can she hold on to the truth she claimed to believe?

As Clint continues to track down a serial kidnapper despite his illness, former investigations haunt his nightmares, pushing him beyond solving the case into risking his life and career. Clint struggles to believe God is still the God of miracles. Especially when he needs not one, but two. Everything in his life is reduced to one all-important question: Can God be trusted?

Amy Wallace is the author of Ransomed Dreams, a homeschool mom, and a self-confessed chocoholic. She is a graduate of the Gwinnett County Citizens Police Academy and a contributing author of several books, including God Answers Moms’ Prayers and Chicken Soup for the Soul Healthy Living Series: Diabetes. She lives with her husband and three children in Georgia.