Song Stuck on the Brain: Stop and Stare by One Republic

(Deep Breath) Phew! Okay, that's the first one in over a week. I feel like I've been running non-stop for the last 12 days. It started with singing for a wedding, then hosting my nephews Open House followed by his graduation... I could go on, but do you really care WHY I was so busy? Didn't think so.
Anywhoo, I did manage to finish a book series (okay, so I had a LITTLE bit of downtime.) Hester Browne's Little Lady Agency series is hysterical and I have to admit, I couldn't help but identify with her a little. The main character, Melissa Romney-Jones is chubby and put upon, the only stable and dependable one in her family. But with a wig and wardrobe change, she becomes Honey Blennerhesket, female wonder and organizing fiend. I only wish I had her ability to change from frumpy to fabulous by adding a corsette, but... we can't have everything. There are three books in the series, and so worth the read.
On a sad note, I lost my baby, Jack. I've put off posting about it, because it's just been too hard, but since Jack has been a big part of my life and posts (even had his own blog for a while), I knew I needed to share.
Jack was between 12 and 13. It started on Monday the 5th with his arthritis kicking up. He limped a little and had a hard time getting up and down, but a pain pill seemed to help. By Friday he was having seizures and lost all use of his hind legs. Saturday morning I took him to the vet. There was nothing they could do for him. The doctor said, for his age, it wasn't uncommon for dogs to go downhill so quickly. With a broken heart I said goodbye and held him while he died. I could barely see to drive home.
Saturday was the hardest. I came home and packed his water and food dish, his bed and his toys. The toys got to me the most. I picked up Duck, Cow, Hedgie and Boar along with his ball and then sat and cried while I held them. They were his favorite things. He would pull all his stuffed animals around him, them use them as pillows and hug them between his paws. After chasing and shaking them, he'd bathe them all over and cuddle with them.
Even now, I can't help but cry while thinking of him. I miss him so much, but it's getting easier. What I miss the most is his smile. He would pull his lips back to show all his teeth in a big grin and then bounce up and down while his tail wagged. That was a typical greeting for anyone that came to visit. I miss his super soft fur and giving him hugs. I miss his furry little face and big blue eyes. I miss his howling with the sirens and chasing squirrels. I miss taking him bye-bye and giving him pizza crusts. He got called Hoover Lips, Sir Barks A Lot, Mr. Bossy Pants, Jack-a-roo, and Fuzzy Butt. And he was very loved. 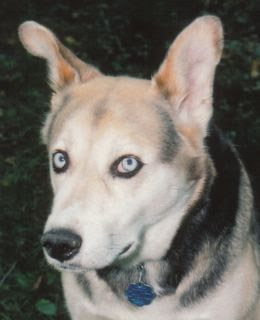 I'm sitting here crying...I will miss Jack so much! He was one fantastic dog. I'm generally not a dog person but, he was an exception. I cried when I got off the phone with you and When I told Lauren, she was sad. I'm so sorry Ape. I know how hard it is to have to do that, you are braver than me though...I couldn't have watched. I wish I could give you a big hug right now!!

April, I'm so sorry for the loss of your beloved Jack. I went back and read through some of your posts about him. I'm a cat person myself, but I would have loved Jack. I hope in time you'll share your love with another little fellow.

God made us to love our pets, and our pets to love us. If you have the book Heaven by Randy Alcorn, there's a very comforting chapter on the loss of our pets.

Thank you Amy and Carole. I appreciate your sympathy and e-hugs. I would love to have another dog, I'm sure I will eventually find another great four footed friend. I've had so many fantastic pets, but in the last 3 years I've seen 4 of our family pets die of old age, three we had to put down. I'm just not ready to go through that again. I don't really think it's a matter of me being all that brave, I just couldn't stand for Jack to face it alone. I would have felt so guilty. I appreciate your good thoughts, they make me feel better. :)

I'm SO sorry! I know how difficult it is to lose a pet. From his picture, it looks like he was a beautiful dog.