Saying Goodbye to a Legend

Song Stuck on the Brain: Man in the Middle by the BeeGees 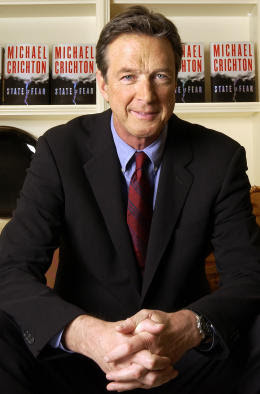 Tuesday, November 4th is a day to remember for more reasons than one. In addition to a presidential election, another event stands out as even more tragic. Michael Crichton died at the age of 66.

I know, it's a few days late in coming, right? That's because I just found out yesterday. (I'd been avoiding news networks because I was sick of political broadcasts...)

I am so sad. Michael Crichton was one of the best story tellers this century. Author of over 30 books and multiple movie/TV scripts, his talent was unmatched in his genre. Hollywood didn't always do his book adaptations justice, but the novels themselves were always a fantastic read. I always felt like I learned so much after reading one of his books. He had a gift for spoon feeding the reader massive amounts of science and research, keeping it easy to understand without talking down to us, all while keeping us on the edge of our seats.

Some of my favorites were actually least successful in the theater. Jurassic Park was a great film and book, but Timeline, Congo and Sphere were never meant for the silverscreen. Andromeda strain was a better read too, but not a terrible film. One of the surprising favorites was Eaters of the Dead. The title scared me off for a while, but I finally gave in and the book was fantastic.

I'm sure for a lot of you, none of this is news. You've probably read a lot of his books, or at least seen his films. But Michael was a writer Hero for me. I admired his skill and creativity so much and I'm just crushed that after his final book publishes posthumosly in May of '09, I'll never read a new Crichton novel.

I hadn't read any of Michael Crichton's books or heard of or seen any movies you mentioned but Jurassic Park. I must be off in my own little world most of the time. Thanks for sharing.
Pam
cepjwms at yahoo dot com

I remember him because of ER. I've never read one of his books. Sounds like it's my loss. Thank you for sharing your thoughts!