Song Stuck on the Brain: Crying Over You by Roy Orbison. (Love his music) I blame tonight's episode of Heroes for this one. 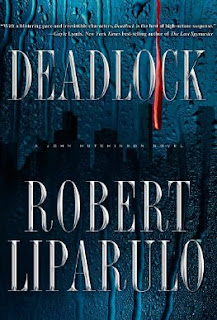 John Hutchinson thinks it's no coincidence that Brendan Page runs this modern Praetorian Guard, and that the billionaire military industrialist must have had something to do with the atrocities his son Declan committed in Canada. The Canadian and U.S. Justice departments disagree, but Hutch has been digging for dirt ever since.

Brendan Page has some dirty not-so-little secrets. he's built an empire on supplying futuristic weapons and highly trained soldiers to the world's most powerful armies. But he's saved his most destructive weapons for himself.

When Hutch discovers the secret of Page's success, Page decides to teach him a lesson. But the operation goes terribly wrong, and Hutch's son is kidnapped. While a lone man stands little chance against the best black op soldiers ever issued M-16s, Hutch manages to survive longer than Page anticipated. As far as Hutch is concerned, high-tech helmets, machine guns, and hand grenades are nothing compared to a man determined to save his son. It's a lesson he sets out to teach Page-and one that he can only hope works as well in the real world as it does in his heart.

If you would like to read the first chapter of Deadlock, go HERE

Robert Liparulo is a former journalist, with over a thousand articles and multiple writing awards to his name. Readers of his action-thrillers were not surprised when his visual storytelling style caught the eye of Hollywood producers. Currently, three of his novels for adults are in various stages of development for the big screen: the film rights to Comes A Horseman were purchased by the producer of Tom Clancy’s movies; and Liparulo is penning the screenplays for GERM and Deadfall for two top producers. He is also working with the director Andrew Davis (The Fugitive, Holes) on a political thriller. Novelist Michael Palmer calls Deadfall “a brilliantly crafted thriller.” March 31st marked the publication of Deadfall’s follow-up, Deadlock, which novelist Gayle Lynds calls, “best of high-octane suspense.”

Liparulo’s bestselling young adult series, Dreamhouse Kings, debuted last year with House of Dark Shadows and Watcher in the Woods. Book three, Gatekeepers released in January, and number four, Timescape, comes out in July. The series has garnered praise from readers, both young and old, as well as attracting famous fans who themselves know the genre inside and out. Of the series Goosebumps creator R.L. Stine says, “I loved wandering around in these books. With a house of so many great, haunting stories, why would you ever want to go outside?”

He is currently working on his next thriller, which for the first time injects a bit of the supernatural into his gun-blazing stories. The story is so compelling, two Hollywood studios are already in talks to acquire it—despite its publication date being more than a year away. After that comes a trilogy of novels, based on the critically acclaimed short story he contributed to James Patterson’s Thriller anthology. New York Times bestselling author Steve Berry calls Liparulo’s writing “Inventive, suspenseful, and highly entertaining . . . Robert Liparulo is a storyteller, pure and simple.” He lives with his family in Colorado.
Posted by April Erwin at 4/13/2009