Song Stuck on the Brain: I Wanna Kiss a Girl by Keith Urban 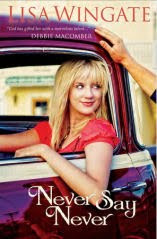 Kai Miller floats through life like driftwood tossed by waves. She's never put down roots in any one place--and she doesn't plan to. But when a chaotic hurricane evacuation lands her in Daily, Texas, she begins to think twice about her wayfaring existence.

And when she meets hometown-boy Kemp Eldridge, she can almost picture settling down in Daily--until she discovers he may be promised to someone else. Daily has always been a place of refuge for those the winds blows in, but for Kai, it looks like it will be just another place to leave behind. Then again, Daily always has a few surprises in store--especially when Aunt Donetta has cooked up a scheme.

If you would like to read the first chapter of Never Say Never, go HERE

Lisa lives in central Texas were she is a popular inspriational speaker, magazine columnist, and national bestselling author of several books. Her novel, Tending Roses, received dozens of five-star reviews, sold out thirteen printings for New York publisher, Penguin Putnam, and went on to become a national bestselling book. Tending Roses was a selection of the Readers Club of America, and is currently in its fourteenth printing.

The Tending Roses series continued with Good Hope Road, the Language of Sycamores, Drenched in Light, and A Thousand Voices. In 2003, Lisa's Texas Hill Country series began with Texas Cooking, and continued with Lone Star Cafe', which was awarded a gold metal by RT Bookclub magazine and was hailed by Publisher's Weekly as "A charmingly nostalgic treat." The series concluded with Over the Moon at the Big Lizard Diner.

Lisa is now working on a new set of small-town Texas novels for Bethany House Publishers. The series debuted with Talk of the Town and continued with Word Gets Around and Never Say Never. A new series is also underway for Peguin Group NAL, beginning with A Month of Summer (July 2008), and continuing with The Summer Kitchen (July 2009) and Beyond Summer (July 2010). Lisa's works have been featured by the National Reader's Club of America, AOL Book Pics, Doubleday Book Club, the Literary Guild, American Profiles and have been chosen for the LORIES best Published Fiction Award. In 2009, A Month of Summer was nomiated for the American Christian Fiction Writers Book of the Year award.
Posted by April Erwin at 2/03/2010