CFBA: Once in a Blue Moon by Leanna Ellis

Song Stuck on the Brain: We are the Champions by Queen

Bryn Seymour was nine years old when her mother died under mysterious circumstances on the same day Apollo 11 made its historic lunar landing. Forty years later—divorced, working as an obituary writer, and duly cynical—she meets Howard, a conspiracy theorist who knew her mom and believes a small Texas town may hold clues to what really fueled her demise. Seeking closure, Bryn goes along for this men-in-black ride. But upon meeting Howard’s son Sam, an outspoken Christian, she can’t decide whose beliefs are more pie-in-the-sky.

The gravity of life has pulled Bryn down for decades. But a perfect love could be her first step to soaring. It only happens once in a blue moon.

If you would like to read the first chapter of Once in a Blue Moon, go HERE 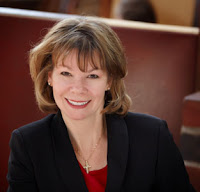 Leanna's sister recommended that she write, since she ‘wrote in her journal all the time.’ The idea took root and began to grow. So after five years of teaching, she quit and started writing, with no clue about the book business. Ignorance is bliss. If she’d known the odds against her, she might not have ever started writing.

For about three years, she wrote with a collaborator, but because she had so many ideas she began to write more stories on her own. She suffered numerous rejections. Deservedly so. But she was growing as a writer and learning. She went to as many conferences as she could manage. During that time, she met her future husband, fell in love and became engaged. She also began to final in contests and then actually began to win! The contests helped her get noticed by editors and agents. In March, the year Braveheart won the Best Picture Oscar, Victor/Victoria opened on Broadway, she sold her first book. It was her Cinderella year. She sold her book, got married and won RWA’s Golden Heart Award in Hawaii.

She wrote six books between her first baby’s birth and when the second baby turned one. Then she hit a wall. Not literally. But creatively. It’s not that she didn’t have any ideas, but her ideas didn’t fit the romance market. These new characters, random and weird as they were, began to take over the part of her brain that wasn’t domesticated. These stories were about all types of women, and so she began to let her writing grow in new and different ways.

Leanna Ellis sold more than 1.3 million romantic novels writing as Leanna Wilson, winning a Readers’ Choice award and the Romance Writers of America Golden Heart award for her work. Elvis Takes a Back Seat is the first book published under her married name, marking a new creative direction in her writing. Like Francine Rivers before her, Leanna has left behind a successful career as an author of secular romances to write novels of faith that glorify God. A former schoolteacher, Leanna is now a homeschool mom and lives with her husband and children in Keller, Texas.
Posted by April Erwin at 3/11/2010

Email ThisBlogThis!Share to TwitterShare to FacebookShare to Pinterest
Labels: CFBA, Leanna Ellis, once in a Blue Moon

Hi, April! Thanks so much for showcasing Once in a Blue Moon here! I so appreciate it!

This sounds like an interesting book and great read. Thanks for sharing. Blessings.
tarenn98[at]yahoo[dot]com