Song Stuck on the Brain: You Ain't Nobody by Michael Buble

This is such a delightful story. I love fantasy and this doesn't disapoint.

About the Book:
The faery world is crumbling. During a disaster called the Sundering, these small, fragile, winged creatures lost all of their magic save that which allows them to fly, and they live inside a great oak tree, fearful of people and animals. True friendship and love are foreign to them. Worse, they are falling victim to a kind of dementia they call the Silence, and are dying. Into this picture comes Knife: tough, brave, adventurous, and soon taking on the job of Queen's Hunter. While defending herself against an attacking crow, she is rescued and taken home by a human. Knife becomes convinced that the mystery of their lost magic and the dementia are connected to the faeries' fear of humans and becomes committed to saving her community. The heart of the book lies in the relationship that develops between Knife and the human Paul, who is a paraplegic. Anderson draws on echoes from countless fairy tales and legends about the relationships between human men and faerie women to enrich this gripping and involving story. While the main characters are vividly drawn, some of the secondary characters and background story are sketched more hastily. Though the book looks like it's for a younger audience, middle-school readers who are willing to stay with the story through its first third will find ample rewards as the relationship between Knife and Paul evolves.—Sue Giffard, Ethical Culture Fieldston School, New York City

What others are saying:
“A gripping and involving story.” (School Library Journal )

“A highly readable, sophisticated tale of romance and self–sacrifice. Readers will hope for more from this talented new author.” (ALA Booklist )

“Anderson creates a fascinating world. This compelling story is full of adventure and mystery.” (Voice of Youth Advocates (VOYA) ) 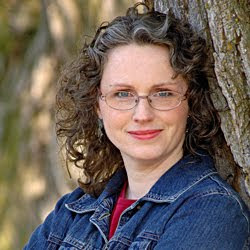 R.J. Anderson (known to her friends as Rebecca) was born in Uganda, raised in Ontario, went to school in New Jersey, and has spent much of her life dreaming of other worlds entirely.

As a child she immersed herself in fairy tales, mythology, and the works of C.S. Lewis, J.R.R. Tolkien and E. Nesbit; later she discovered more contemporary authors like Ursula LeGuin, Patricia A. McKillip and Robin McKinley, and learned to take as much pleasure from their language as the stories they told.

Now married and a mother of three, Rebecca reads to her sons the classic works of fantasy and science fiction that enlivened her own childhood, and tries to bring a similar sense of humor, adventure, and timeless wonder to the novels she writes for children and young adults. She currently lives in the beautiful theatre town of Stratford, Ontario.

Check out the author's other sites:

YOUR BLOG VERY VERY GOOD, USEFULL, CAN I LINK EXCHANGE WITH YOU ??

I'm glad you enjoyed the story, April! Thanks for sharing this information with your readers and for participating in the Blog Tour.