Song Stuck on the Brain: You are Loved by Josh Groban

I enjoyed Gretchen's story in a great deal because it introduced me up close to new cultures. The Amana communities aren't commonly written about and I enjoyed seeing the differences in their culture compared to the many Mennonite and Amish books that are popular right now. The gypsies were also an interesting twist.

Gretchen is faced with three very unique men as possible love interests and although I was fairly certain I knew who she would choose, there was always a vague hint that she just might surprise you in the end. What made all of this both fun and poignant at the same time was Gretchen's Oma. Watching her care for a grandmother slipping into dementia was both humerus and sad, giving the reader the opportunity to see that although the grandma's antics were funny, there was real fear and anxiety experienced by the family. Judith Miller approached it with finesse.

More than Words is a heart-warming feel good tale with a touch of romance and excitement, and a large lesson in looking into your heart for truth.

Journey to the charming villages of the Amana Colonies, 1885

Gretchen Kohler is an Amana storekeeper's daughter with a secret passion for writing. But artistic pursuits are frowned upon in her conservative Amana village, so she confines her poems and stories to her journals, letting only close friends read them.

When a young reporter comes into her store, she believes she's found a kindred spirit. She shares a few of her stories with him--only to have her trust betrayed in the worst of ways, resulting in trouble for her entire community.

The scandal is made even worse by the fact that gypsies have camped nearby and seem to be preying upon the Amanans' compassionate, pacifist nature. Will Gretchen lose her job, her reputation, and the love of her childhood beau all because of one bad decision?

Judith Miller is an award-winning author whose avid research and love for history are reflected in her novels, two of which have placed in the CBA top ten lists. In addition to her writing, Judy is a certified legal assistant. Judy makes her home in Topeka, Kansas.

If you would like to read the first chapter of More than Words, go HERE. 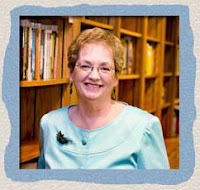 Most readers want to know how authors 'got started' writing. My first novel, Threads of Love, was conceived when I was commuting sixty miles to work each day. I wanted to tell the story of a pioneer girl coming to Kansas and the faith that sustained her as she adjusted to a new life. When the book was completed, I tucked it away. I had absolutely no idea how publication of a book occurred and had given no thought to the concept. However, through a co-worker, I was directed to Tracie Peterson who, at that time, worked down the hall from me. Having never met Tracie, I was totally unaware of her writing career, but God intervened. The rest is, as they say, history....

With a graciousness that continues to amaze me, Tracie agreed to read my story, directed me to a publisher, and gave me information on a Christian writers conference. Since that first encounter many years ago, I have been blessed with the publication of numerous books, novellas and a juvenile fiction book. Joyously, Tracie and I had the opportunity to develop a blessed friendship. In fact, we have co-authored several series together, including The Bells of Lowell, the Lights of Lowell and The Broadmoor Legacy. In addition, I have continued to write several solo series. Please check those out on the "My Books" page on my website.

God's design on the lives of His people never ceases to amaze me! Because I am eternally grateful for my own forgiveness and salvation, I strive to share God's desire to pull us from the mire of sin and set us free to live exciting lives for Him. Through His abundant grace and love, God gifts and equips each of us to share the story of salvation and eternal life. Won't you share His story using the special gifts He has given you?
Posted by April Erwin at 9/15/2010

Email ThisBlogThis!Share to TwitterShare to FacebookShare to Pinterest
Labels: CFBA, Josh Groban, Judith Miller, More than Words, You are loved