CFBA: Another Dawn by Kathryn Cushman

Song Stuck on the Brain: So Far Away by Rod Stewart

There are a lot of reasons that I chose to read, 90% of which has to do with entertainment and escape. I love suspense, romance, fantasy, scifi, thrillers, and even drama to some degree - as long as I feel there has been a good portion of escapism involved. I want the story to make me laugh and cry. Make me get mad at an injustice and root for the hero to come out on top.

I think a lot of readers want that. My best friend and my sister refuse to read anything that might include sadness or a semi-sad ending. I always shake my head and tell them that those stories can be beautiful too. I'm not one to toss a story aside because characters are miserable, because there's always something good to be experienced in a book.

(You know there is a but coming here...)

I think Another Dawn falls into that final category for me - kind of. Kathryn Cushman is a very good writer. I felt every emotion, cried with the family and hoped for a happy ending. I think the message about finding new beginings was well woven into the the story and it made a very good point. However, I can't say I really enjoyed the book for entertainment value.

Although the story and writing were good, I found myself getting seriously annoyed with Grace, Jasmine and even Jana. I didn't feel like I was connecting with Grace in a positive way at all. The debate over the vaccinations felt a little heavy handed. I know people on both sides of that argument, so I know from real life it can get heated. I understood the underlying message that Grace's actions were just like her Dad's and that is how she was able to see things in a new light, but that felt a little forced to me.

I did love little Dylan. What a sweet and insightful child. He was the bright spot in the book for me. Overall, when the book was done, I felt relieved that things were resolved, and the book was done. I didn't feel happy, entertained, or even intrigued. I felt relieved. I can't say it was bad, just not for me. I know others will probably have very good reviews for Another Dawn, and I won't argue them. Technically the book had it all, it just didn't hit the mark for me. 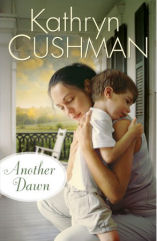 Grace Graham is back in Tennessee with her four-year-old son on a short unpaid leave from work, helping her father recover from surgery and spending time with her sister.

Shoal Creek seems more backward than ever after her years in California, and it's hard to find organic food anywhere. When the unthinkable happens and her son is diagnosed with measles, Grace's fears over modern medicine take a dangerous turn.

Worse, the town has fallen into quarantine and its residents focus their anger and blame on Grace. She is alone and scared, until one brave woman chooses to reach out a hand of forgiveness and mercy. But when the outbreak takes a life-threatening turn, will Grace be able to forgive herself?

If you would like to read the first chapter of Another Dawn, go HERE.

Kathryn Cushman is a graduate of Samford University with a degree in pharmacy. After practicing as a pharmacist, she left her career to marry and begin a family and has since pursued her dream of writing.

Leaving Yesterday, her third novel, was a finalist for the ACFW Carol Award.

Now her fifth book, Another Dawn, has arrived in stores.

On the homefront, Kathryn has been married to Lee for over twenty years now, and their two daughters are currently braving the worlds of junior high and high school. They’ve lived in Santa Barbara for the last nineteen years. It’s a beautiful place and Kathryn feels blessed to be there (although a seventy degree Christmas still leaves her dreaming of a white one—or at least a colder one!)
Posted by April Erwin at 2/09/2011

Email ThisBlogThis!Share to TwitterShare to FacebookShare to Pinterest
Labels: another dawn, CFBA, Kathryn Cushman, rod stewart, so far away