The Art of Romance by Kaye Dacus

Song Stuck on the Brain: I'm a Believer by The Monkeys

The Art of Romance

This is my favorite of Kaye's books so far, and that's saying a lot, because I'm a big fan. You read yesterday's post about Love Remains, book one in the Matchmaker series, now let me introduce you to it's sequel.

Caylor and Dylan have more history than either of them realize. In fact, they might never have discovered it, if there grandma's weren't best friends and matchmakers. Perty and Sassy are just two of the 80 something grandma's that lovingly manipulate, er, pardon me... encourage their grandchildren to meet.

Caylor is an English professor, Christian Romance novelist, caretaker for her grandmother, choir member, often times assistant of the college drama productions and sometimes participant... her list of activities makes me tired just thinking about it. But she's happy with her life and satisfied that she's destined to forgoe love and marriage inorder to take care of her grandmother, Sassy.

Dylan is an artist that's trying to get his life back on track after it was hijacked by his ex-girlfriend. He comes home to Tennessee with little to his name. He moves in with his grandparents and begins to rebuild his life. Starting with a little encouragement from grandma Perty to check out a professorship at the college where Caylor works.

Of course, love ensues but not without it's issues. Secrets hard kept are harder shared, but eventually Caylor and Dylan learn to trust each other enough to open up and it's a beautiful thing.

I think I identify with Caylor more than I have any of Kaye's characters. Caylor and I share a lot in common, including the same favorite color- purple. (Ok, so I'm not tall or statuesque, but I have green eyes and red highlites...) The resemblance goes deeper and it was exciting to turn a page and think, YES! that is so me. I would totally do that. For example, there's a scene where Caylor and her sister Sage do the "Sisters" song and dance routine from White Christmas. That's my fav Christmas movie and my sister Angel and I do that song too. It was kind of like de ja vu.

I was super lucky to win autographed copies of both Love Remains and The Art of Romance from Kaye's blog and I gladly agreed to be an influencer. Why not? I already shout their praises from the roof tops. SO! Be good book-loving blog reader and accept my influence. Go find the nearest Kaye Dacus book you can get your hand on and read it! 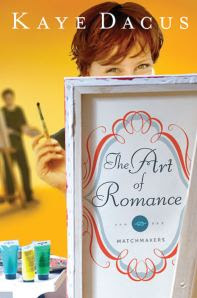 Sassy Evans and Perty Bradley are determined to get their older grandchildren married off, but when twenty-eight-year-old Dylan comes home after being fired from his teaching position because of the betrayal of his ex-girlfriend, Perty knows her grandson has more important issues to deal with first.

Sassy understands her friend's reservations about timing, but she also sees so many ways in which Dylan could be the perfect match for her thirty-four-year-old granddaughter Caylor. With his record of acclaimed paintings and Caylor's bestselling novels, they could complement each
other's talents and provide each other support and encouragement. And there's no denying the spark of attraction between the English professor with the untamed red hair and the painter with the unusual tattoos.

But neither grandmother realizes the secrets both Caylor and Dylan are keeping from each other. Will pain and embarrassment from the past keep Caylor and Dylan apart, or will they develop the courage to be truthful with each other and discover the true art of romance? 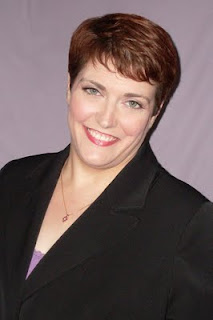 Kaye Dacus (KAY DAY-cuss) is an author and editor who has been writing fiction for more than twenty years. A former Vice President of American Christian Fiction Writers, Kaye enjoys being an active ACFW member and the fellowship and community of hundreds of other writers from across the country and around the world that she finds there. She currently serves as President of Middle Tennessee Christian Writers, which she co-founded in 2003 with three other writers. Each month, she teaches a two-hour workshop on an aspect of the craft of writing at the MTCW monthly meeting. But her greatest joy comes from mentoring new writers through this very blog and seeing them experience those “aha” moments when a tricky concept becomes clear.
Posted by April Erwin at 6/17/2011

Email ThisBlogThis!Share to TwitterShare to FacebookShare to Pinterest
Labels: I'm a Believer, Kaye Dacus, The Art of Romance, The Monkeys, Video