Blame It On the Mistletoe by Joyce Magnin

Blame It On the Mistletoe
A Novel of Bright’s Pond 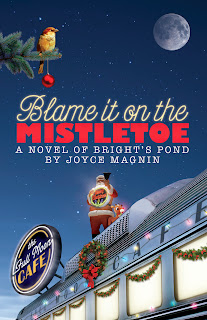 Is There Really a Fountain of Youth in Paradise?

Welcome back to Bright 's Pond, where strange happenings are afoot at the Greenbrier Nursing Home. Strange even for Bright 's Pond. The residents suddenly act like kids again riding trikes, climbing trees, and of all things falling in love. Some of the townsfolk blame it on the crooked new gazebo, or its builder, a quirky little man who quotes Don Quixote, collects water from the fountain at the Paradise trailer park, and disappears on a regular basis.

While Chief of Police Mildred Blessing investigates the mystery, Griselda and her friends deal with a luau Thanksgiving, preparations for the Christmas pageant, and maybe even an upcoming wedding. Only, in Bright 's Pond, nothing ever really goes as planned . . .

I love getting a chance to know the person behind the story. Joyce was kind enough to answer a few quirky questions of my own.


Being a writer is a great job. What's the worst job you've ever had?


HA! Any job that required me to be there. LOL. But working at a newspaper building ads was so insipid and boring.


If you could meet anyone in the world, dead or alive, who would it be and what would you say to them?


Emily Dickinson for the dead person. I would say, "Emily, I finally understand what you meant by circumference." Guess you have to read Emily Dickinson but truly, that's what I say.


I was five six years old and got home from kindergarten to find nine puppies in the kitchen. I got to play with them. My mother found them in a cave in the woods behind our house. She got the mama dog also. We got to keep one of the pups. We named her Polly and she was the best dog ever.


If you had to marry a fictional character, from film, television, or books, who would it be?


Gandalf. He has great fireworks and is a wizard and all.


Very intriguing, Joyce! I worked at a newspaper in the circulation dept. for a short time at the end of high school. Would much rather be writing! :) Thanks so much for taking time to hang out with us. 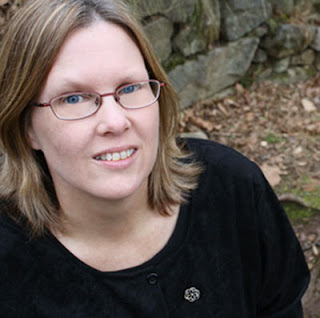 Joyce Magnin is the author of several books, including The Prayers of Agnes Sparrow, named one of the "Top 5 Best Christian Fiction Books of 2009" by Library Journal. Her short fiction pieces and articles have been published in such magazines as Relief Journal, Parents Express, Sunday Digest, and Highlights for Children. A member of the Greater Philadelphia Christian Writers Fellowship, Joyce is a frequent workshop leader at various writer’s conferences and women’s church groups. She has three children and one grandson, and is mom to a neurotic parakeet who lives with her in Havertown, Pennsylvania.
Posted by April Erwin at 12/09/2013

Email ThisBlogThis!Share to TwitterShare to FacebookShare to Pinterest
Labels: Abingdon Press, Blame It on the Mistletoe, Joyce Magnin