After reading Storm Siren by Mary Weber, I was addicted. It was such an amazing book. It also left me hanging! So the release of Siren's Fury was a celebratory moment.

Fury picks up at the very moment that Siren ended. Be prepared for this intro to cut your heart and make you bleed. I very briefly considered screaming madly and throwing the book across the room. But seeing as it was only chapter one, I decided to give the author room to 'fix' things for me. lol. This book does build at a little slower pace - more intrigue, secrecy and magic - but was so worth the wait.

Siren's Fury also has a darker feel, but there was a purpose to the darker journey and it didn't feel gratuitous. This is a trilogy and Fury is the middle of the heroin's journey. Nym has learned a great deal about herself and the world around her. I'm very anxious to see where her journey takes her in book three. I highly recommend this series. 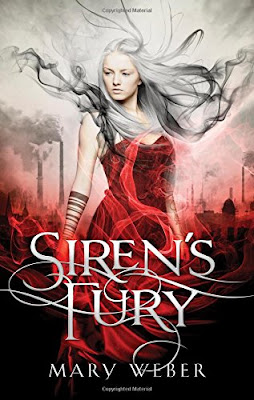 “I thrust my hand toward the sky as my voice begs the Elemental inside me to waken and rise. But it’s no use. The curse I’ve spent my entire life abhorring—the thing I trained so hard to control—no longer exists.”

Nym risked her life to save Faelen, her homeland, from a losing war, only to discover that the shapeshifter Draewulf has stolen everything she holds dear. But when the repulsive monster robs Nym of her storm-summoning abilities as well, the beautiful Elemental realizes her war is only just beginning.

Now powerless to control the elements that once emboldened her, Nym stows away on an airship traveling to the metallic kingdom of Bron. She must stop Draewulf. But the horrors he’s brought to life and the secrets of Bron are more than Nym bargained for. Then the disturbing Lord Myles tempts her with new powers that could destroy the monster, and Nym must decide whether she can compromise in the name of good even if it costs her very soul.

As she navigates the stark industrial cityscape of Bron, Nym is faced with an impossible choice: change the future with one slice of a blade . . . or sacrifice the entire kingdom for the one thing her heart just can’t let go.

Mary Weber is a ridiculously uncoordinated girl plotting to take over make-believe worlds through books, handstands, and imaginary throwing knives. In her spare time, she feeds unicorns, sings 80’s hairband songs to her three muggle children, and ogles her husband who looks strikingly like Wolverine. They live in California, which is perfect for stalking L.A. bands, Joss Whedon, and the ocean. {Facebook: marychristineweber, Twitter @mchristineweber, Blog: maryweber.com}