Song Stuck on the Brain: Love Lifts Us Up Where We Belong. Call me crazy, but this song popped into my head this morning along with an idea for a Victoria's Secret commercial. And no, I wasn't doing anything related to bras at the moment.

Once again life has been a little crazy. It seems this holiday season is determined to be a sad one. We lost one of our bosses to a heart attack shortly after Thanksgiving. Joan was a sweet woman. Then, just a few days ago a close friend called to tell us a relative had committed suicide. It's been heartbreaking for them and I can't help but empathize. It's killing me to watch them suffer so much. We also learned my ex-brother in-law fell off of a latter and broke his hip, rendering it impossible for him to travel down for Christmas. I promise none of our family prayed for him to get hurt, but not one of us is sorry he won't be making the trip. I do hope he heals well though, I know he must be in a lot of pain, and I don't wish that on anyone. Not even him.

To top it off the benefit concert planned for this last weekend had to be cancled due to the ice storms, which we're getting more of as I type. I don't like ice. Not even in my lemonade.

Although, the last couple of weeks have been harried and sad, I know that God's hand is going to carry everyone through this and bring them out to a happier day.

Today also starts the twelve days of Christmas, and we have guest blogs from now til Christmas. I hope you enjoy. Oh and don't forget to enter the contest to win Fearless. Just click on the book at the right to email your entry.


Celebrating the true meaning of the Christmas season, GRPR is proud to introduce to you the twelve days of Christmas. Twelve inspired devotional thoughts written by some of the best and brightest authors in the Christian industry.


On the first day of Christmas, my true love gave to me....
The Gift of Honesty 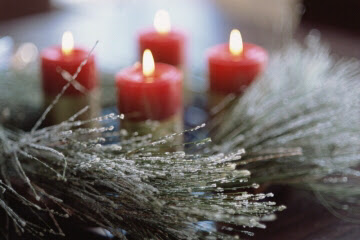 
As a new Christian, I wasn’t really prepared for the stark truth about my previous life. Rummaging in my closet, I came across several shirts I had shop-lifted a couple of years before. I immediately remembered several items from the same heist.

Standing there trembling, I was unsure about what to do. I prayed, “God, what should I do about this?” It seemed the inner voice spoke immediately: “You need to return them to the store.”

I didn’t need to reflect much on it. I knew that was the right thing to do.

I packed up the items, drove to the nearby Bamberger’s store at the Cherry Hill Mall and found security. I explained what I’d done and offered to pay for the items. The guard smiled. “Every now and then we get one of these,” he said. “I’ll find out the prices and you can pay.”

A few days later, I got the call. Over sixty-five dollars in charges. In 1972 dollars, that was a lot of money. I sucked it up, though, wrote out a check and dropped it by. The guard thanked me for my integrity, saying, “I wish there were more like you out there. But shop-lifting costs us big-time. Just the same, I respect what you did.”

I went away feeling like I’d pleased God. There were other things I would return in the coming days, and it was always difficult. And costly. But the peace of mind and heart I received were all worth it. To say nothing of the witness to unbelievers, one of whom invited me to come visit him his family in Switzerland after I sent him back the stamps I’d stolen while babysitting his children years before.

Mark Littleton is the author of The Ten-Second Prayer Principle: Powerful Prayer As You Go (Howard Books, 2007) and many other books. For more information visit life-ology.townhall.com or www.winsunliterary.com.
Posted by April Erwin at 12/10/2007