Song Stuck on the Brain: Clumsy by Fergie 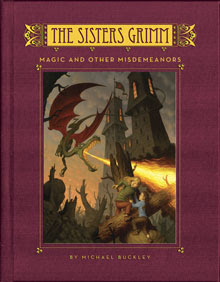 I just finished Magic and other Misdemeanors, book five in the Sisters Grimm series. I thought it was the last in the series. I'm both excited and frustrated to find that it is NOT. I love this series, and the book did not disappoint. However, now I'm left anxiously waiting for book SIX.

I decided to hop on over to the The Sisters Grimm website to see if I could find any info on the next book in the series. I didn't, but I did find other fun stuff. Like the Grimm Game. It's a Fairy Tale Generator. It was a lot of fun and my story turned out surprisingly cohesive. I thought I'd share it. Although, if you want to do your own, go play the game first and then come back and read mine so it doesn't ruin the story for you.

Lil' Miss Priss’s Fairy-Tale
Once upon a time there was a World Class Story Weaver named Lil' Miss Priss with the most beautiful eyebrow in the whole world. Unfortunately, she was very sad because her one heart’s desire was to have a Peppermint Ice Cream.

An old witch in her town named Angel the Magnificent told her that she could find a Peppermint Ice Cream at the top of Mount Eric Boy. Our hero was filled with hope so she went home and got Nunu, her pet elephant, and together they headed off into the forest below the mountain. The forest was dark and creepy and gave Lil' Miss Priss and Nunu the heebie-jeebies, and it wasn’t long before they both started hearing rustling noises. They were coming from a nearby holly bush. Before they could run away, a gruesome monster jumped out of the holly bush, nearly scaring them to death!

“I am the mighty Ichthiopius! If you wish to pass you must answer three questions,” it said.

“But we don’t have time,” Lil' Miss Priss cried. “We’re trying to get to the top of Mount Eric Boy.”

“Tough noogies to you,” Ichthiopius cried. “Answer my questions or go back home. First, could you fit a foil crown in your nose?”

“Ha!” Ichthiopius laughed. “You’re right! You have a huge nose. Now, answer me this. How many cream filled long johns could you eat in one sitting?”

“Well, I don’t care much for cream filled long johns but if I had to I could probably eat 22.”

The monster laughed even harder. “What does your pet’s pinkie toe smell like.”

“I don’t know why you would care but it smells like anchovies.”

The monster realized our hero was honest and true and allowed her to pass. So, Lil' Miss Priss and Nunu went farther into the woods until they came to a clearing. There, on a pedestal sat a foil crown.

“Well, that’s weird,” Lil' Miss Priss said. “That monster was just talking about one of these. I suppose I should take it. It might be helpful later on, though I don’t know how.”

So Lil' Miss Priss and her trusty pet, Nunu, set off again and found themselves at the base of Mount Eric Boy. There they found a monkey bars and used it to scale the mountain. They struggled for 22 days and 19 nights. All the time they were attacked by giant wolves and enormous flying frosted sugar cookies with passionate purple tentacles and chartreuse earlobe. But, finally, they got to the top of the mountain. It was a good thing, too, because they were both ready to give up and go back home!

At the top of Mount Eric Boy was a huge lime green castle with a drawbridge. On the drawbridge was a big basket filled to the top with cream filled long johns. “Well, this is peculiar,” Lil' Miss Priss said. “I remember that lunatic monster in the woods was asking about these, just like he did about my nose and the foil crown. I guess I could take these with us in case they come in handy, but to be honest, I have no idea how they could be useful.” So she hoisted the basket onto Nunu’s back and together they went into the castle.

Once inside they found an ugly Gremlin, even more gruesome and smelly than the first monster. In fact, he smelled like cream filled long johns that had fallen under the seat of a hot car.

“I am the mighty Karen the Baker, King of the Goobers! I rule this castle and everything in it. I suppose you’ve come here because I have tons of Peppermint Ice Creams.”

“Then you must show me something remarkable!” King Karen the Baker said.

Lil' Miss Priss was so angry she jiggled, but getting mad wasn’t going to solve her problems. She had to do something remarkable and the only thing she could think of was to stick her foil crown up her nose. So she did! It was totally disgusting, and Lil' Miss Priss looked like an idiot with the foil crown sticking out of her nostril, but the King of the Goobers applauded. “That is remarkable.”

“I’m glad you’re impressed,” our hero said. “Now may I have a Peppermint Ice Cream?”

“No one has ever eaten more of these than I have but if you can I’ll give you your heart’s desire.”

So, seeing that she had no choice, and being a bit hungry from climbing the mountain, our hero removed the basket from her pet’s back and dumped all the cream filled long johns onto the table. Together, she and the King ate and ate. They ate for 357 days and 19 nights. They even ate on Christmas, until the buttons popped off their pants. But, when it was all over, Lil' Miss Priss had eaten one more cream filled long johns than the King of the Goobers.

“Absolutely not,” the king bellowed. “You cheated somehow. I won’t give it to you.”

Our hero was so angry she picked up her pet and shoved Nunu’s pinkie toe into the King’s face. The King screeched in horror.

“NO! I can’t stand the smell of elephant pinkie toe. It’s my only weakness!” And a moment later the King of the Goobers melted into pickle juice all over the floor. Lil' Miss Priss and Nunu were glad to be rid of him and searched the castle, finally finding the Peppermint Ice Cream! And since the castle was now abandoned they decided to live there, where they would never have to stick a foil crown up their nose or eat nasty old cream filled long johns again. And besides, they had no idea how to get back down the mountain.