Enter to win a copy of: 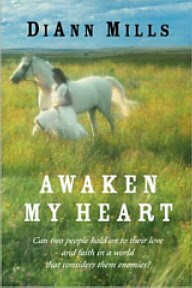 Awaken My Heart by DiAnn Mills

1803, the colony of Texas Marianne Phillips, the daughter of a wealthy rancher, has never agreed with her father's harsh treatment of the poor mestizos who first inhabited the colony of Texas. When rebels kidnap Marianne, in hopes her father will trade back their land for her freedom, she realizes her loyalty lies with her abductors, not her father, who plans to marry her off to the don of a nearby estate.
Armando Garcia is the locals' reluctant leader, but his people revere and depend on him. Knowing that without his leadership they'd be forced from their land, Armando accepts his role, but does not approve of the latest attempt to manipulate their enemy. When he learns that Marianne actually speaks his language, of her loyalty to his people, and of the faith that keeps her strong, Armando is faced with a difficult decision. Will his newfound love keep him from letting her go? Or will he set her free and risk losing their land forever?

Contest is open to US and Canadian residents only and ends at Midnight, Satuday March 15, 2008. To enter, click on the book cover in the sidebar to email me your entry.

Hi, I enjoy reading books set in Western places. Please enter me in your drawing. I appreciate it! Thanks,Cindi
jchoppes[at]hotmail[dot]com